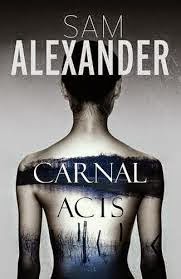 Carnal Acts by Sam Alexander (#WhoIsSamAlexander) has more layers than an onion: prejudice, xenophobia, religion, class privilege, culture clash, misogyny, economics, global politics. It purports to be a thriller - and it is - but as is the modus operandi of Arcadia Books (London), there is so much more to the story.

Detective Inspector Joni Pax is the newest member of the Major Crime Unit of the brand-new Police Force of North East England, transferred from London after almost losing her life in a take-down gone horribly wrong. Heck Rutherford is a veteran of the force and architect of the new unit, recovering from surgery and cancer treatments. On the night of May Sunday, essentially a celebration of Beltane (even if most people no longer know the origins of the party) amid the ancient ruins of Roman walls and the much more recent ruins of defunct heavy-industry in the far north of England, the girls in the brothel have been warned that it'll be a busy night. Suzana, taken from Albania at the age of seventeen, determines that this is her chance and she will escape or die trying. DI Pax chases after Suzana as she crashes out the front door of the brothel, having killed one thug and seriously injured two others, and disappears into the urban blight. The descriptions of this place remind me of Detroit. But I digress.

Meanwhile, Lord and Lady Favon (an unholy marriage of a psychopath and a sociopath) live on their estate (built of slavery and Caribbean sugar) and manipulate the levers of the townspeople, corrupt officials, and professional mob, in a myriad of illegal enterprises running the gamut from merely unsavory to multiple-mortal-sin-evil. As the body count rises, people disappear, multiple sightings of Suzana are reported, and Albanian mafiosi arrive to dispatch anyone mucking up their business interests, all clues begin to point in one direction. Can Pax and Rutherford shut this down before they get shut down themselves?

"Sam Alexander" is a pen name; there's been a big Twitter campaign to guess who the author really is. Rumor has it that the author is actually a well-known and acclaimed British writer of crime novels. Whoever Sam Alexander is, we know from Carnal Acts that his (or her) plotting is intricate and skillful; the pacing is impeccable - the action never flags even though it is rather a long read for a suspense novel. The mix of characters is well balanced and believable; the portrayal of a fairly insular, homogeneous population on the moors of northern England being dragged kicking and screaming into a more egalitarian post-colonial world of porous borders is both touching and maddening. I wanted to hold the hands of half of these characters and coax them along; others I wanted to slap silly. The only quibble I have with Carnal Acts is the uneven dialogue - at times I was laughing aloud at the verbal jousting and at other times I was exasperated by the cliches spouted by the bad guys.

A few words of warning: this book is tough to take at times. The misogyny is breathtaking - I learned a couple of terms for female genitalia that I wish I could unlearn. I also struggled with some of the graphic descriptions of rape in many varied forms, though I ultimately decided that this wasn't gratuitous. Sex-trafficking is a global scourge that must be faced, not something we hide away and pretend does not exist because it embarrasses us or makes us uncomfortable, or, in my case, homicidal. For the facts and to learn what you can do, please check out the Polaris Project, Safe Horizon, or go here for a list of organizations. The 2013 Trafficking in Persons Report (TIP Report) can be found here. If you need help for yourself or know of someone who needs help, this is a confidential hotline that is staffed 24 hours: 1-888-373-7888.
Posted by Texas Book Lover at 8:34 AM