Antón Mallick Wants To Be Happy 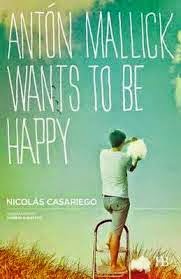 
Happiness in intelligent people is the rarest thing I know. - Ernest Hemingway

Antón Mallick is not happy. In fact, Mr. Mallick is clinically depressed and suffering from anxiety attacks, and for good reason. But he's had "Enough is enough. I don't want to be a pessimist, or a victim, any more. I reject the status of black hole. This notebook, which I address and dedicate to Vidor Mallick [his great-great-great grandfather], inveterate gambler and amateur loan shark, is proof of my will to optimism, that is, my great desire to become a man with a sunny disposition, happy, normal, one of the guys who springs out of bed every morning and has answers for pretty much every single one of life's many questions." Antón Mallick Wants To Be Happy by Nicolás Casariego (translated from the Spanish by Thomas Bunstead) is a tragicomic chronicle of Mr. Mallick's attempts at breaking free from the depression and anxiety that has gripped him for the past year. He seeks the things we all seek - redemption, reconciliation, reckoning, to create some sense from the randomness.

There are clues dropped at irregular intervals as to the cause of Antón's misery but we aren't let in on the secret until about halfway through and it isn't explained to us until much later. By that point the revelation is expected but the details are shocking. This is your first clue: as Antón begins to clean up the mess in his apartment, "...and open all the envelopes, the piles and piles of letters, all the condolences, invitations, bank statements and bills..." Something momentous has absolutely trashed - almost destroyed - this man's life. He has tried to ameliorate and compensate with alcohol, various substances, and women, to no avail. In fact, it's an encounter with one of these women that finally compels him to try to get himself together. She's pregnant and has disappeared; he's the father and has no idea who she is.

His brother Zoltan, a psychologist in Madrid, and his sister Bela, a professor of Spanish literature in the US, are consulted. Zoltan recommends pop-psyche bubblegum-and-Big-Red titles, such as The Psychology of Optimism: Glass Half Empty or Glass Half Full and Your Erroneous Zones: Step-by-Step Advice for Escaping the Trap of Negative Thinking and Taking Control of Your Life. As Antón notes, "...it would overall be a good thing if these idiots were right and happiness were nothing but a question of personal discipline, of iron will plus agreeable disposition, and if luck had nothing to do with it, nor circumstances, nor genes, nor lack of intelligence, nor a combination of all of the above." Bela's recommendations tend toward philosophical treatises beginning BCE with Epicurus, and including Marcus Aurelius, Rousseau, Lao Tzu, Sun Tzu, Voltaire, and the Bhagavad Ghita. Antón decides that, "I don't want to be Epicurus, nor Seneca, nor Marcus Aurelius, much as I admire them. They're pessimists, the poor bastards, in spite of doing everything humanly possible to mitigate our suffering and achieve a state of quietude. I don't want to die in life..."

Antón Mallick Wants To Be Happy is a delightful, almost perfect balance of comedy and tragedy, pop culture and philosophy, the banal and the transcendent. The author, Nicolás Casariego, creates complete characters and complex family relationships with uncannily authentic dialogue. And, for which I am always most grateful, he has confidence in his readers. Casariego doesn't dumb-down any of the concepts Antón considers and discards, although Kierkegaard can make your head hurt. My only complaint is that the pace lags a little during the third quarter. But then again, so does Antón. I truly laughed aloud beginning on page two and by the end of this novel I was quite fond of Antón Mallick. The impetus for the story is pure tragedy but this novel fairly glows with hope.

Nicolás Casariego is the author of eight books, including Cazadores de luz, which was a finalist for the Nadal Award, and co-writer of three feature films. In 2008 he was awarded the Writers OMI residence fellowship for international writers at Ledig House, New York.
Posted by Texas Book Lover at 7:00 AM