The Worst Hard Time: The Untold Story of Those Who Survived the Great American Dust Bowl
By Timothy Egan
Houghton Mifflin Company
340 pgs
ISBN 978-0-618-34697-4
Rating: This is my first 5 of 5 rating and I am so excited!

The Worst Hard Time won the National Book Award for nonfiction in 2006 and this award is well deserved. The New York Times said of this book "This is can't-put-it-down history." and I heartily agree. The Dust Bowl spanned the years of 1931-1939 and effected parts of Nebraska, Kansas, Colorado, New Mexico, Oklahoma and Texas. Meteorologists still consider this to be the nation's worst prolonged environmental disaster. Drought contributed to this giant mess, however drought was not unusual in the High Plains. The ruination of the plains was not due to climate change. It was due almost entirely to the actions of man.

The High Plains were considered to be the best grassland in the world. In 1804 Lewis and Clark pronounced this land to be "well calculated for the sweetest and most nourishing hay." The Comanche, the Lords of the Plains, lived and hunted there. They chased on horseback the great bison herds over the plains and used them for everything from dinner to teepee hides, used the stomachs as canteens and the tendons for bow strings. This land was perfect for grazing antelope and buffalo. They fed on the grasses but left the stubble and root systems intact. This allowed the grasses to hold down the soil so that they endured and came back each year for millenia.

The settler farmers changed all that. In 1820 Stephen Long, a government engineer, explorer and surveyor, declared this land "...almost wholly uninhabitable by a people depending upon agriculture..." His advice was heeded by no one. The federal government removed the Comanche from the land (as they always did - after breaking a treaty) to free up the land for farmers. The farmers used their plows and then tractors to turn the earth under, pulling up the grass. The farmers planted wheat during a time when Russia was not exporting wheat so the price was sky high. Then Russia began exporting again and the price of wheat dropped like a rock. To make up for the lower price the farmers plowed yet more acreage which further destroyed the grasses and set the topsoil free. I am a native Texan and I know all about how the wind blows on the High Plains: 24/7 and so it stole the unprotected topsoil and left behind dust. It is estimated that 80,000,000 acres of soil disappeared. Wheat won't grow in dust and neither did anything else.

Then the dust storms began. They sometimes topped out at 10,000 feet. The National Weather Service had no name for the phenomena. They weren't just simple dust storms or sand storms. No one had ever seen anything like it. The farmers called the dust storms "black blizzards," so named because it was frequently dark as night at high noon. The many effects of these blizzards were sometimes brutal. The storms generated static electricity so strong it shorted out cars and sparked with human contact such as handshakes and hugs, and electrified barbed wire fences. They caused dust pneumonia which was sometimes fatal. The flying dust blinded people and animals alike. Farm animals died from internal suffocation and starvation because their stomachs were full of dust.

The people tried all sorts of things to deal with the dust. They hung wet sheets over doors and windows and mud brown water ran in rivulets to the floor. When it was really bad they soaked towels in water and put them over their heads - inside. The Red Cross handed out face masks and people applied Vaseline to their nostrils in an effort to trap the dust before it got into their lungs. Homes had to be swept continuously because the dust always found a way in. It sifted down the walls like flour; often you needed a shovel to dig out of your home.

When Franklin D.Roosevelt was elected president in 1932 he thought the desperate situation of the farmers in the High Plains should be treated as a matter of relief. He dispatched Hugh Bennett, the director of a new agency within the Interior Department, to assess the situation and report back. When Bennett returned with his report FDR realized the extent of the disaster. The government put in place several programs to try to restore the balance in the High Plains. Among other things, they planted trees and grass. They bought up land and livestock. They paid farmers not to plow.

There are places in the High Plains that have yet to recover from the damage done to them by human hubris. But there is good news. There are now three national grasslands in the High Plains run by the Forest Service. The grass has come back in part thanks to the restoration and conservation efforts put in place by FDR. The antelope are back and there is a plan underway to reintroduce buffalo as has been done in other parts of the plains. 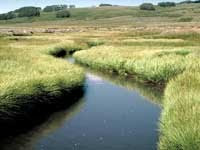 The Worst Hard Time is history at its most readable. It is never dry and there are no lists of dates. It's a collection of personal stories of the families that lived through this time that made me want to read this book as I would normally read a thriller: cover to cover in a couple of days. For those of you who don't like histories I recommend that you give this a try. I give it a 5 of 5: sheer perfection.

Bonus: The federal government's Resettlement Administration commissioned a film in 1936 to play for audiences in the rest of the US in order to draw public support for their policies. The result was The Plow That Broke the Plains starring a reluctant Bam White whose story is recounted in The Worst Hard Time. You can see the film (25 minutes) here:http://video.google.com/videoplay?docid=1119800966783091956#
Posted by Texas Book Lover at 3:40 PM