The Opposite of Maybe

The Opposite of Maybe, Maddie Dawson 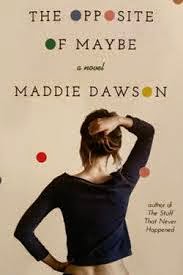 Relax. Nothing is under control.

As it turns out, Betty White has been impersonating Soapie (a toddler’s attempt to pronounce “Sophie”) all along. Soapie is Rosie’s profane, hard-headed, charming, 88-year-old grandmother whom Rosie describes as, “…so frail that it feels as though she’s constructed of chicken bones and coat hanger wires held together with Scotch tape, but she’s also tough, like a wild animal that’s about to bolt.” When we meet Soapie she’s lying on her kitchen floor, having fallen (again) while mixing Bloody Marys for her yoga class. That’s right – Bloody Marys and yoga. She had me at hello. Soapie’s health has been deteriorating recently – falls, irregular heartbeat, forgetfulness – and Rosie has been trying to persuade her to hire a home health aide. It’s not going well. This is how not-well it’s going:

“No, you don’t. You want me to be safe, and that’s a whole different thing. And now that I’m a thousand years old, I’m going to start having me some fun, and I am not hiring some nurse to follow me around. If I want to drink and smoke and have sex, then it’s nobody else’s goddamned –“

Soapie looks at her with amused, narrowed eyes. “Well, I really got your attention now, haven’t I?”

Rosie, a poet and English teacher, and Jonathan, a potter and collector of antique teacups, have been together for fifteen years. They are the last of their Connecticut social group still unmarried, childless-by-choice, and mortgage-less; they like it that way, without what Jonathan calls the “…unsavory entrapments of adulthood.” Rosie says Jonathan has “clung to his grad student existence as though it were an ethical stance.” They have their routines; they’re comfortable with each other. This is how comfortable they are:

[Jonathan’s phone rings during sex one Saturday morning. And he answers it.]

“You know…I think it’s great and all that we’re so comfortable with each other…but sometimes, just sometimes, wouldn’t it be nice if it was…romantic again?”

He blinks. “Romantic is overrated. Sometimes you get it, and sometimes you don’t. We get laughs and realness, which has got to be better over the long haul.”

“I know,” she says. “But can’t we shift gears? We used to be able to shift gears. I think once upon a time, the phone could even ring, and we didn’t pay any attention to it. Remember that?”

He says, “There’s nothing wrong with us. This is just life. Middle-aged life.”

I wanted to shoot him then, on page eight. Rosie is restless and bored and dissatisfied, stymied by Jonathan’s inertia at every turn, but she doesn’t quite know that yet – actually, she doesn’t want to know. Knowing becomes unavoidable when Jonathan finally proposes and announces that they need a fresh start. In California. Opening a teacup museum. After some thought, Rosie decides she’s “98 percent happy” with this plan. Until Jonathan takes off for San Antonio with his business partner in the museum to eyeball some collectible teacups that have just come on the market. The day before the wedding. What’s the big deal? They can get married at city hall any time they want, he says. But Rosie knows she can’t move across the country and leave Soapie unattended and her home and her students for THIS. So she stays. And Jonathan goes.

Rosie moves back in with Soapie in what is supposed to be a temporary arrangement. It’s just a short break from Jonathan, just a little time, that’s all, she’s going to follow him to California after she gets her grandmother settled, she really is. At Soapie’s place she discovers that her grandmother has found help around the house: Tony is separated from his wife, missing his son, at loose ends; George is a lifelong friend whose wife is suffering from Alzheimer’s in an assisted living center. As Rosie tries to sort out everyone else’s lives, she discovers that she is pregnant. And The Opposite of Maybe is about what happens next.

Author Maddie Dawson has a gift for dialogue, the way people really talk, and a fondness for word games. She is at her best when describing emotions without getting all gooey on us.

And Rosie, just sitting there, is having the most blinding sort of epiphany…when you realize that your crazy, impetuous grandmother might be drunk and mean, but she’s also right about you. Really, what is she doing with her life? She’s lived this quiet little tucked-in, halfway unsatisfying life…She never had a family, she never owned a house, she never even bought a brand-new car, had a disastrous love affair with an inappropriate person, or even dyed her hair some ghastly shade of red. How does this happen, that you get to be forty-four and you don’t’ have anything – not even an ill-advised tattoo – to show for it?

The Opposite of Maybe is the perfect summer vacation companion – immensely readable, fun and affecting, devoid of all pretense, and utterly charming. Toss it in your beach bag or backpack. You can thank me later.

Posted by Texas Book Lover at 9:22 AM