In this season of graduations and in keeping with the great books here at TexasBookLover, I'd like to share a Q&A with the author of School Board, Texas's own Mike Freedman, who graduated from the MBA program at Rice University in Houston this month. You can read my review of School Board here.

Q & A with author Mike Freedman

Tell us about your military experience as a Green Beret. Did certain novels have great meaning for you while were in Iraq?

My choice to join the military probably originates with being abroad for the first time during college (my junior year was spent at the University of St. Andrews in Scotland), and that experience coinciding with 9/11. Processing 9/11 as a young American abroad affected me in a way I’m sure was vastly different than had I been stateside. If not for those two events, I’m sure I would have gone to law school like every other rich kid.

You could say that my time in the Special Forces was the greatest education of a lifetime; a far different path than my classmates took. If a soldier leaves the war with nothing else, they at least take away a sense of humility and awareness. From that awareness, most veterans I know are serious, but don’t take themselves too seriously.

As far as reading overseas, I read voraciously – especially dissecting the American dark humorists like Heller, Southern, Berger, Vonnegut, Pynchon, Percy, Toole – and during my second tour I often carried around Bruce Jay Friedman’s brilliant Stern and Evelyn Waugh’s Put Out More Flags. They might as well have been my body armor.

With all of that military experience and time spent abroad, why choose to write a novel that is set in Houston? 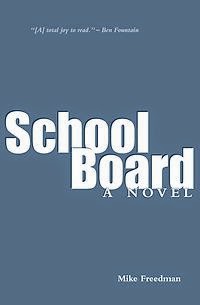 I wrote School Board because I wanted to use main characters, like Tucker Davis, to tell the tale of those who went overseas–be it in Vietnam or Iraq/Afghanistan–and to tell the tale of my wildcatting hometown of Houston, for much of the madness of those ten years had its roots in that setting as well.

You portray a singular period in Houston history: 1999, when the city was aflush with money and confidence, but just before it would receive a black eye following the Enron scandal. What is it about Houston you want people to take away from School Board?

There is really no city like Houston. You have to grow up here (or at least live here a few years) to understand the culture, as it is where the South meets the West, with just enough international dash thrown in for good measure.

In my opinion, the tale of Enron is very Houston, so much so in fact that you can’t tell the story of modern day Houston without addressing it. By that I mean that in Houston you have to take the ugly with the good, and sometimes they are one in the same (no zoning laws, for example). The same maverick spirit that made things possible, like the Texas Medical Center and NASA, also gave us Enron. That’s Houston.
Posted by Texas Book Lover at 9:54 AM