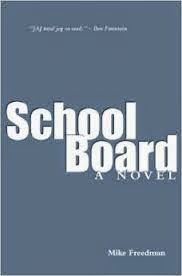 Indeed. School Board is Mike Freedman's rollicking debut novel about eighteen-year-old Tucker "Catfish" Davis's chimerical campaign for a place on the school board in the Memorial Park area of Houston. Catfish is a devotee of the infamous brothers Governors Long of Louisiana; pen pal of the indicted current governor of the Pelican State, Bobby Boudreaux; and president of his high school class, thanks to the Share Our Wealth Coalition he assembled to defeat the water monopoly and get Dr. Pepper machines in the school cafeteria. Catfish bills himself as the Last Populist, champion of the little folk, his rallying cry "Every kid a king!"

There is so much going on in School Board that the org chart would resemble Enron's. There is the school board campaign, the mayor, Sam Houston, big business, the media, the Alamo, dirty tricks, the prom, unions, US Special Forces, tax incremental reinvestment zones (TIRZ - I like to think this rhymes with "tears," as in the tracks of my...), gay rights and a GPS-challenged manatee, just to scratch the surface. Catfish's opponent in the school board race is Walker B. Moore (the "Last Wildcatter"), president of the giant energy company Synergy. Moore begins this book as the familiar stereotype of a certain type of obtuse Texas bidnessman, mistaking an Iranian student as Hispanic, touting loyalty as the ultimate virtue. Fisher Hughes, whose jaded demeanor shields a hopeful heart, is the reporter who chronicles the story for the local newspaper.

There are times when Catfish lays on the populist patois so thick that I think the author should've dialed it back a bit but there are many more instances in which I laughed out loud. From page 161, a conversation between Moore and the political consultant Synergy hired for him:


"Less polo playing, more goat roping."
"We live in Memorial, the richest area of town."
The political consultant showed a poll from The Pony Express with Walker trailing by twelve percent.
"That's Tucker's paper," Walker said. "What legitimate poll has a margin of error of eleven percent?"

And this from page 223, the introduction of a few new scholarships Tucker convinced a benefactor to endow:


Up through the undredged world, citizens of the Bayou City moved in the other direction. Never a town to look back, new pioneers explored waters and lands and space to be tomorrow's history. Begat in a coastal swamp, it grew in a fever, lost in a fever, and always rediscovered in a fever.

The author Mike Freedman is a native of Houston, Special Forces veteran (see page 207 - 'nuff said) and MBA candidate at Rice University. I give an enthusiastic tip of my hat (why did the political consultant have Walker Moore wear a black hat? hhmmm) to Freedman - what an imagination! All of the raw ingredients exist in the swamp but it takes something special to make this smooth and finely-spiced gumbo of them. School Board is a fine addition to the tradition of American satire refined by Mark Twain. Catfish isn't as smart as Tom Sawyer but he's crafty and you'll still end up painting the fence.