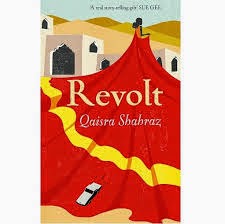 Revolt takes place in the fictional Pakistani village of Gulistan and tells the story of three wealthy sisters and the tectonic changes that happen in their lives when the phenomenon of immigration and the Western notion of romantic love threaten to dismantle all they’ve ever known. As the story opens Mehreen’s son Ismail is flying home from London for his wedding; Gulbahar’s son Arslan is flying in from New York, a homecoming after completing his studies; and Rani is preparing for her daughter Saher’s wedding to Ismail. One more person has also come home to Gulistan for this important week: Gulbahar’s exiled daughter Laila has returned in hopes of seeing her brother. Laila hasn’t seen her family in 10 years, since she ran off and eloped with the potter’s son. Laila is persona non grata, as is her daughter who has never met her grandparents.

It is almost impossible to tell you anything else that happens because there are so many plot twists and surprises and secrets that seemingly-endless spoilers would be unavoidable. And none of Revolt should be spoiled. So let’s say this:
One of the elements I particularly appreciated is that the servants and villagers are as fully-realized as the figurative royalty living in the hevalis. Their stories are told just as faithfully, their humanity never slighted, at least not by Shahraz. One of my usual complaints about family-saga-type novels is that they drag along, what with all the jumping back and forth between the past and present. That doesn’t happen in Revolt. We are provided with the flashbacks necessary to advance the story and nothing more (or less). Accordingly, the pacing is relentless and the plotting practically flawless. The land itself is fondly rendered by the author, a native Pakistani who moved to the UK with her family as a small child.

Qaisra Shahraz is a novelist, short story writer and scriptwriter. Previous works include The Holy Woman (which won the Golden Jubilee Award and is a best-seller in Turkey and Indonesia) and Typhoon. Shahraz was recognized in the Pakistan Power 100 List in 2012. She is currently at work on her fourth novel.

A closing thought: Revolt also reminded me of a Mexican telenovela, in the best way possible. Sure there’s melodrama but, unlike telenovelas, it never descends to farce and that’s what made this work so much fun to read. It’s not “heavy literature” but Shahraz handles her material with such affection for human foibles and a deft comedic touch that she examines some weighty issues without beating you about the head and shoulders with it. This planet of ours is shrinking by the day and by the end of Revolt you will have learned something about a culture clash that has instigated chaos across the globe. Like us, the characters here don’t handle the complexities well in the beginning but by The End they’ve come to realize that when you get right down to it, people everywhere are simply people. Our differences are much less important than our commonalities.
Posted by Texas Book Lover at 12:36 PM