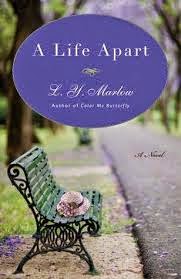 
You are at once both the quiet and confusion of my heart. - Franz Kafka

"It is hereby declared to be the policy of the President that there shall be equality of treatment and opportunity for all persons in the armed services without regard to race, color, religion, or national origin." - Executive Order No. 9981, issued by President Harry Truman, July 26, 1948

A Life Apart begins on December 7, 1941, that infamous day in Pearl Harbor aboard the USS Oklahoma. Morris Sullivan of Boston and Robert Dobbins of Jackson, Mississippi are sailors in the United States Navy. Robert dies soon after saving Morris's life during the Japanese assault. When Morris is finally released from the hospital ship he goes in search of his savior. You'd think this would be simple, yes? An honorable desire to thank this man who was Morris's personal hero. But Dobbins is "colored" and it is Jim Crow 1941, before the time of Brown v. and the above Executive Order, and that makes all the difference.


Morris...often wondered what things would be like when the war was over; whether the world would bend toward a solemn retreat, a kinship that led people to integrate rather than segregate, to reserve rather than retaliate, that employed altruism rather than aggression.

Morris is viewed suspiciously by white and black alike. When he learns that Robert died during the attack Morris writes a letter to Robert's listed next-of-kin, his sister Beatrice, to express his grief and gratitude. A correspondence begins and engenders a love that will oblige Morris and Beatrice to risk everything they have ever known.

Morris returns home to Boston after V-J day to his wife Agnes (yep) and young daughter Emma with permanent injuries to his leg and psyche, nightmares that will wake him for the rest of his life. He is a changed man and Agnes responds to his soul-weariness by dispassionately setting about constructing the perfect domestic life for her beloved husband. The theory seems to be that perfection will stave off chaos and the problem seems to be "dispassionately." The years pass and they are practical, comfortable, content, "tempered." Then one day, by happenstance, Morris sees Beatrice again and all of the old feelings return, magnified. What follows is a sweeping story of half lives that could have been made whole much sooner if Morris was not so befuddled and our society was not so Puritanical. As surely as there is more than one way to tie a knot (I started with "skin a cat" but that struck me as just gruesome), there is more than one way to be a family. Some ways are more painful than others. As Samantha Sullivan tells her therapist, "They are stuck because people won't let them be unstuck." Indeed.

I took seven pages of notes while reading this story. That's a record. It made me angry; it made me sad; it made me gasp out loud and had me all teary by the end. The only (intermittent) issue I have with A Life Apart is one of style. Word choice is sometimes clumsy, there are a lot of adverbs, and the text would benefit from a ban on the twinning of exclamation points and question marks. Trust your reader. We know where the emphasis should be; we are screaming in our heads. Otherwise this book is as near to perfect as it is infrequently possible to be. The prose is tuneful and the dialogue genuine. As we follow these characters over the next 47 years they are alive on the page, their motivations as convoluted as yours and mine and therefore believable. The author never preaches; she simply lets the story do its thing. The pace is flawless, set in motion by the Butterfly Effect in full force, and the dawning apprehension of the approaching mother of all plot twists inspires something akin to dread. By the end, back at Pearl Harbor in the year 1988, everyone has had their shot at atonement and redemption.

A Life Apart is L.Y. Marlow's second novel. Her first novel, Color Me Butterfly, is a USA Book News Best Books award winner. She is the founder of Saving Promise, a national organization dedicated to raising awareness of and preventing domestic violence.


A Life Apart hits bookshelves near you April 22nd. Read it. It will make you a better person. A closing thought: make your own rules. And if there comes a time when those rules no longer serve the greater good for everyone involved, go ahead and break them.