By Oscar Coop-Phane
Translated from the French by Ros Schwartz 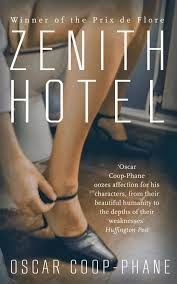 
A man is born alone and dies alone; and he experiences the good and bad consequences of his karma alone; and he goes alone to hell or the Supreme abode. - Chanakya

Such a diminutive volume, so deceptive. Zenith Hotel, the debut novel by Oscar Coop-Phane, is not an easy book, though it's only ninety-nine pages. It's not a moderately challenging book. Zenith Hotel is a difficult book, a demanding book. It is ninety-nine pages of exquisitely rendered portraits of the inescapable human condition we spend all of our time trying to escape: solitude.

Nanou is a "...streetwalker. Not a call girl or anything like that, no, a common streetwalker with high heels and menthol cigarettes." She lives alone in a squalid studio in Paris. Nanou makes no apologies or excuses; she offers no explanations. Zenith Hotel is a slice-of-life à la Raymond Carver, a single day that represents all days; nothing changes. Nothing changes in the lives of her customers either: Dominic is mentally ill; Emmanuel is suffocating in suburbia; Victor's only family, his dog Baton, is dying; Luc is learning to accommodate his sadness, to make room for it inside his skin, so that it doesn't devour him whole; Jean Paul asks for coffee, struggling with the compromises between idyll and practicality that we all must make; Robert intermittently makes the effort to reach for what he thinks he should want, only to retreat. These men could be any one of us; they are us. Nanou is a repository. She collects and absorbs the despair and inchoate longings of the men who hire her. There but for the grace of god.

Zenith Hotel is not going to be everyone's cup of tea. It is not pretty and pulls no punches. It is both sacred and profane, simultaneously subtle and in your face. If what you like most is plot or action then look elsewhere. If you require your story in a neat package with a bow on top at the end or, for that matter, a conclusion to your story, then look elsewhere. But if you are brave and empathetic and curious and tend toward the poetic, then you will appreciate this work. It's worth the effort. Be brave and curious.

The author, Oscar Coop-Phane, left home at sixteen for a career as a painter. At twenty he made his way to Berlin where he began to write. The result was Zenith Hotel, which won the Prix de Flore in 2012, and Tomorrow, Berlin, which will be released in translation by Arcadia Books in 2015. His third novel, Octubre, is due later this year.
Posted by Texas Book Lover at 10:00 PM