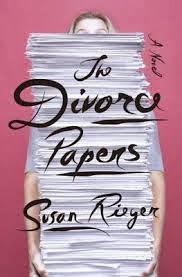 
My mother always says, never make sacrifices for your husband or children; they hold it against you forever. - Sophie Diehl, Esq.

I am torn. The Divorce Papers by Susan Rieger is funny and sophisticated and entertaining, even the formatting of the pages is clever. The story is told in epistolary fashion: emails, a great variety of monogrammed stationery, attorney-work-product memos, excerpts from civil law statutes, pleadings and, in one memorable instance, a psyche eval. Kudos to the design team. But there's no "there" there. The Divorce Papers is a cream puff. Now don't get all bowed up on me - I understand that not every book must be War and Peace or even The Yonahlossee Riding Camp for Girls. Is this "chick lit?"

The Divorce Papers is the story of the dissolution of the marriage of Daniel and Mia Durkheim and the custody determination for their daughter Jane. The novel begins and ends with a note "From the desk of Sophie Diehl, Esq." Ms. Diehl is a criminal law attorney with a tendency to poor relationship choices who got roped into handling the Durkheim divorce because all the family law practitioners were out of the office. We follow the action, or lack of, in minute detail, beginning with the initial Divorce Work Sheet: Income and Deductions and Assets and Liabilities, through several iterations of proposed settlement agreements. The details are interesting at first, appealing to the voyeur in us all, like watching badly-behaved rich people on reality TV. By the time the parties reached a settlement agreement I was skimming because I had the value of their treasury bills memorized ($90,000).

The Divorce Papers does excel at character studies. Each character came fully alive in their missives to each other. Mostly this was a good thing. Sophie is very young, only 29, with a pronounced wont to say whatever she's thinking - no filter, and tends to whine a good deal. I wanted to yell at her to shake it off, grow up, but she is exceedingly bright and funny and well-read. We get to watch her firm up her spine and develop into a first-rate family law attorney (see page 118). Mia is a delight throughout: intelligent, funny, caustic and fierce, she never hesitates to call "shenanigans." Several characters play supporting roles: Sophie's marvelously French mother, her English father (a Marxist historian), her best friend Maggie who acts as anchor and helps ground Sophie when she threatens to float away like a helium balloon on her own dramatic currents, and Mia's father Bruce Meiklejohn who turns out to be the kind of father and grandfather every girl should have, despite some initial misgivings.

The Divorce Papers strikes me as almost regional literature - New England, subset WASP. I fear that many readers will have difficulty identifying with the characters; it is all so very Mayflower. Think pearls, boarding school and summer houses on the Vineyard or the Cape. Actually there is a summer house on the Vineyard; it's not part of the property settlement because it was Mia's before her marriage to Daniel and is therefore separate property. (See? I learned a few things.) I was thinking, "This is all very Cheever" and on page 97 Sophie's boss asks her if she's ever read Cheever. When it's not patrician not-just-first-world-but-1% problems then it's cosmopolitan intellectual. Think Columbia, old world Europe and obscure literary references.

A memo from Sophie to her boss in the civil practice, pg 92:

Memo from Sophie to her boss in the criminal practice, pg 157:


...Everything's so much more straightforward upstairs - maybe because there's no property at stake, only life or liberty.

The Divorce Papers is the debut novel of Susan Rieger. Ms. Rieger is a graduate of Columbia Law and has taught law at Columbia and Yale, among other colleges. Her articles have appeared in several publications including the Boston Globe and the New York Times. She knows whereof she speaks.

Some advice: do not skip the case law. I almost made the mistake of assuming the mock Reporter cases included in the text would be dry legalese and skipping them entirely. DO NOT DO THIS. They are hilarious, particularly Martins v. Martins, page 101, and Paynter v. Paynter, page 132. By the way, this last case actually references Couples by John Updike. What did I tell you?
Posted by Texas Book Lover at 5:50 PM