The Ballad of a Small Player 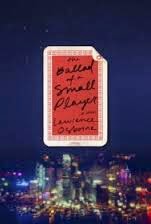 
Be careful what you wish for, for you may get it.

“Lord Doyle” (the Chinese may not know who he really is but he is under no illusions) is a British lawyer, dissolute gambler and fugitive from the law. Having fled Sussex a decade ago, he has adopted Macau, China as his playpen and money as his preferred toy. Also hookers.  He is holed up in the Hotel Lisboa, reputed to be the world’s largest casino, with revenue of $7m a day. Doyle haunts the VIP rooms, minimum bet $10k, maximum $2m. He is not the only thing haunting those rooms.

In Lawrence Osborne's The Ballad of a Small Player, our hero is an addict, no doubt about it. Doyle’s hands sweat and his mouth goes dry; he feels dizzy; he feels like a “shaman.” This is dopamine flooding the system, folks. And guess what? It doesn’t really matter if he loses. He needs to lose as well as he needs to win. It’s the roller coaster (the “electric flow of my own irresponsibility”) his brain chemistry has been taught to require. The casino managers and employees revile him, are disgusted by this gwai lo, even as they rely on him and his ilk for their livelihoods. Punto banco baccarat is the drug of choice. I did not know from baccarat (“that slutty dirty queen of casino card games”) so please indulge me as I explain.

PBB is purely a game of chance; there is no skill involved. Each player (punto) is given two cards; add the values of those cards and the highest number wins. Cards two through nine are face value; the ten and the face cards are worth nothing; the ace is valued at one. If your score is higher than ten then you subtract ten (a modulo ten).  If your two cards total less than five then you can request a third card. For example: the banco deals and your cards are a four and a 7; your score is one modulo ten because 4+7=11, which is greater than ten, so you subtract ten. The highest possible score in PBB is nine, a “natural.” Page 46:

“Punto banco baccarat is a struggle with the pure laws of chance. When you play it you are alone with your fate, and one is not often alone with one’s fate. When you play it your heart is in your mouth. Your pulse quickens to an unbearable pace. You feel that you are walking along the edge of the volcanic precipice made of sharp, hot rock cut as fine as a razor and capable of breaking with all the drama of glass. It is a game surrounded by threatening possibilities: instant death, which comes even quicker than it does with poker or roulette. That’s what I like about it. There’s no lingering illusion. Death by guillotine.”

Our story opens as Doyle loses yet again and allows himself to be picked up by a young woman at the baccarat table, Dao-Ming. She is lovely and a tad shy, not long out of her village. They share the night and Doyle finds himself rather touched by her simple ways, affected as he no longer thought possible. She feels the same way about him. He is supposed to call. Surprise! He doesn’t call. Instead he returns to the tables and manages to lose his last two chips. The Lord, intermittently suicidal, is sitting at the Hotel Intercontinental in Kowloon indulging in his last meal, which he cannot pay for, when a woman sits down at the table with him. It is a sophisticated, stylishly dressed and well-spoken Dao-Ming. She rescues him: pays his bill and spirits him away to her home at the top of a hill on Lamma. She nurses him and feeds him and restores him. Once restored our Lord Doyle, inescapably, begins to itch for the baccarat tables. So Dao-Ming makes his return possible and then disappears. Doyle embarks upon the longest, grandest most ridiculous winning streak anyone anywhere has ever seen. We’re talking millions. But guess what? It’s not enough. It’s not the point. The point is the roller coaster. And you can’t have a roller coaster if you never plunge. Page 228: 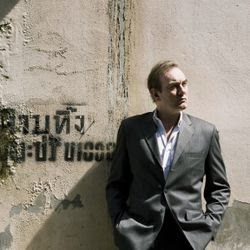 Lawrence Osborne has invented an original and intriguing character in the other-worldly Dao-Ming. She is a master blend of contradictions as she simultaneously offers up her physical self and slams down tight the grille barring her authentic ego. Lord Doyle, on the other hand, is not unique; no, he is all too common. Doyle is a sad case, pitiable, even tragic, and sometimes deranged, but he is never laughable. This is one of the myriad instances in which this author proves his skill: I cared about Doyle, even in his most abased moments when his addiction has him on the mat; even as he finally went about strategically, deliberately ruining himself. He believes that in his ruination what he truly needs will come back to him.

Lawrence Osborne is not just a master at creating complicated human beings, he also excels at immersing you in his environment. Osborne paints Macau and Hong Kong alive with his prose. You can hear the strident mobs in the pits; taste the oolong tea; see the garish pseudo-Roman circus décor of the casinos; smell the stench of the ubiquitous clouds of cheap cigarette smoke; feel the rain soaking your hair as you take the ferry to Hong Kong – it is monsoon season in the South China Sea. But here in the land of the I Ching there is also a sixth sense.

Are you superstitious? No? Are you sure?