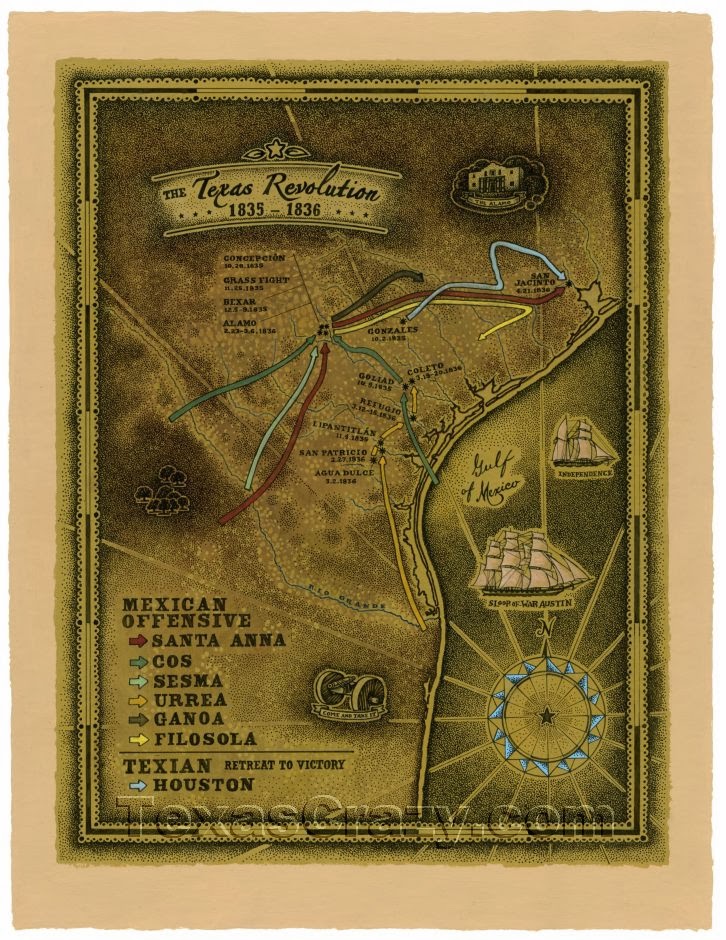 On this day (no leap year quibbling, please) in Texas history, 1836: As the Battle of the Alamo raged on in San Antonio de Bexar, 59 delegates assembled for a convention at Washington-on-the-Brazos, about 180 miles northeast of the Alamo. The Convention of 1836 would meet until March 17 and write both the Texas Declaration of Independence and the Constitution of the Republic. It would also organize the new Republic’s interim government until the first elections could be held. But today, March 2, the delegates put pen to paper and signed the document below. This is a signature page from the original manuscript of the Declaration of Independence, which resides with the Texas State Library and Archives Commission (TSLAC) in the Texas State Archives. This page contains the closing lines: “The people of Texas do now constitute a free, Sovereign, and independent republic, and… we fearlessly and confidently commit the issue to the decision of the Supreme arbiter of the destinies of nations.” 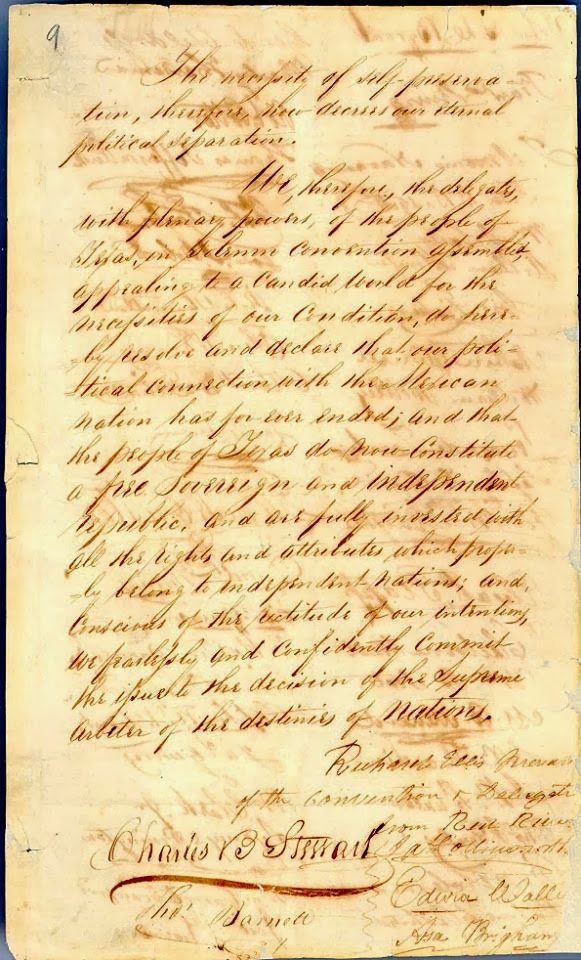 Below is Independence Hall at Washington-on-the-Brazos, captured in ruins in the 19th century. It was here that the Texas Declaration of Independence was signed and the government of the Republic of Texas created. Convention President Richard Ellis appointed George C. Childress, James Gaines, Edward Conrad, Collin McKinney, and Bailey Hardeman to a committee to draft the declaration. However, Childress, the committee chairman, is today generally accepted as the declaration’s author. Since the document was submitted for a vote of the whole convention on the second day, Childress probably already had a draft version with him when he arrived. After the declaration was approved March 2, the convention proceeded with other business, receiving regular reports on Mexican General Santa Anna’s ongoing siege of the Alamo.

This photo resides with TSLAC in the Texas State Archives. Other historical items related to the declaration are on their website: www.tsl.texas.gov/treasures/republic/declare-01.html 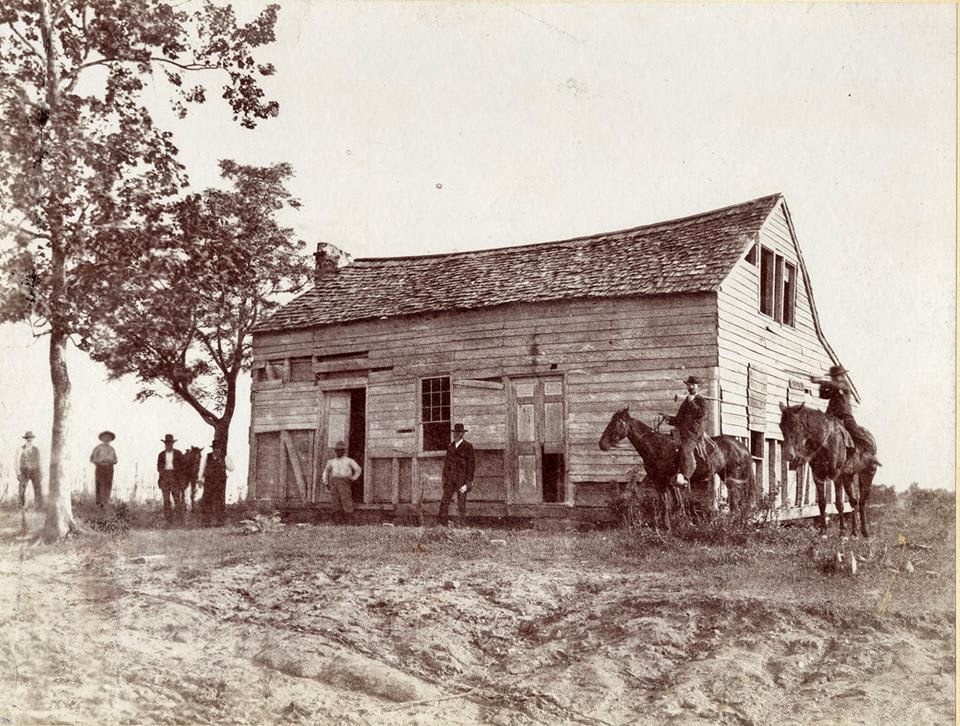 The powerful closing lines of the Texas Declaration of Independence are inscribed on the west façade of the Lorenzo de Zavala Building next to the State Capitol in Austin. And rightly so for inside that building reside the declaration’s original manuscript and many other historical items related to the Republic of Texas. You can view them here: www.tsl.texas.gov/treasures/republic/index.html 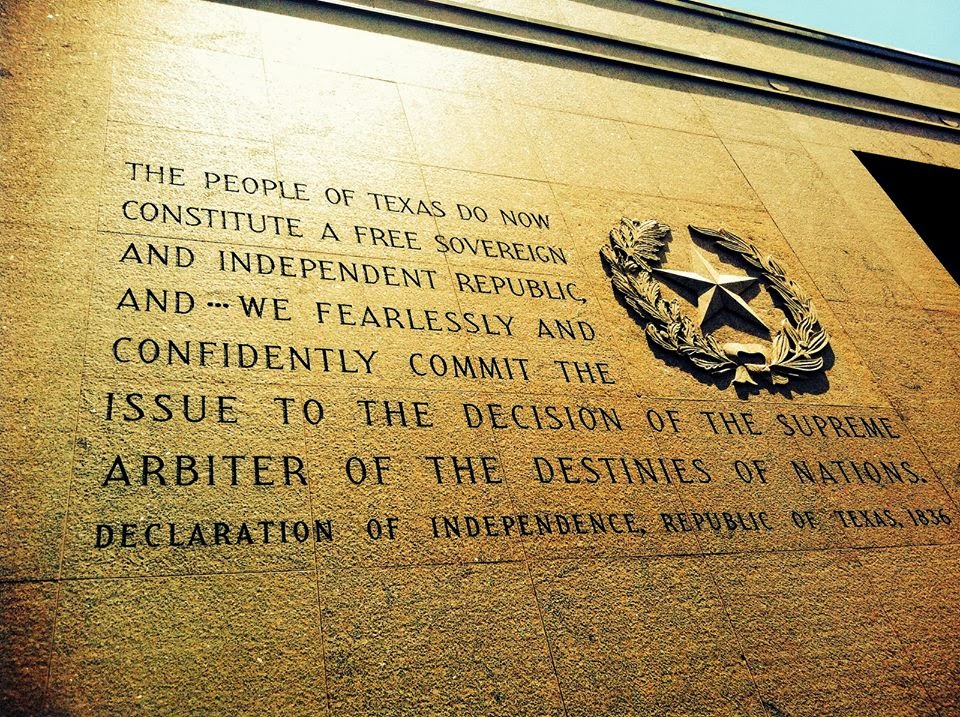 Thanks as always to the TSLAC for sharing.