The Number of Independent Bookstores is on the Rise! 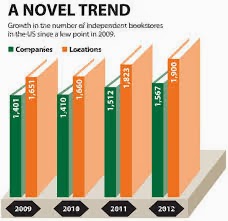 One reason for the renaissance of independent bookstores is the public’s renewed interest in locally-owned stores, said Dan Cullen, a spokesman for the ABA. “Nationwide, there’s been a ‘shop local’ movement recently,” Cullen said. “It’s become apparent that many, many more consumers are choosing to shop in local businesses of all kinds, not just bookstores. They recognize the influence their shopping dollars have in those stores, and in the local communities.”

In some cases, the chain bookstores may even provide a boost to the independent stores. Many customers may buy the newest best-seller from a national chain or Amazon, but once they’re done with the book, they’ll take it to an independent bookstore that specializes in used books, such as Texas's own Half Price Books. For instance, I paid a visit to a Half Price Books in San Antonio last week and bought 7 books for $93. Can't beat it with a stick. Or a hammer.

For information on independent bookstores in Texas you can click on the "Texas Indie Bookstores" tab at the top of the main page of this blog. For other locations please pay a visit to IndieBound.
Posted by Texas Book Lover at 8:27 PM

Email ThisBlogThis!Share to TwitterShare to FacebookShare to Pinterest
Labels: bookstores