Amendment One to the Constitution of the United States of America:


Congress shall make no law respecting an establishment of religion, or prohibiting the free exercise thereof; or abridging the freedom of speech, or of the press; or the right of the people peaceably to assemble, and to petition the Government for a redress of grievances.

U.S. Supreme Court Justice William Brennan (one of my personal heroes), in Texas v. Johnson (it would be Texas), said,

“If there is a bedrock principle underlying the First Amendment, it is that the Government may not prohibit the expression of an idea simply because society finds the idea itself offensive or disagreeable.”

Book challenges and bans are typically based on one (or more, sometimes all four, sometimes "Just because I don't like it and neither should you") of these four bugaboos: sex, profanity, religion and racism. Challenges are usually brought by parents in an attempt to protect their children from influences they view as harmful. Parents just doing what they ought to be doing, guiding their children, yes? No. Parents have every right to guide their own children but no one has the right to control what other people read, be they nine years old or ninety.

Please refer to this bibliography for a list of books challenged, restricted, removed or banned in 2012-2013, as reported by the Newsletter on Intellectual Freedom. Keep in mind that this list is not exhaustive. It is estimated that up to 85 percent of actual challenges receive no media attention and go unreported. Challenges are on the rise. Follow this link for ideas, resources, how to report challenges, and ways you can get involved. 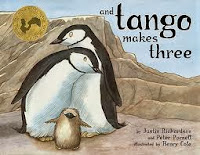 Many, many thanks to the American Library Association's Office for Intellectual Freedom for what you do every day. Now y'all go be subversive! Read a book of your choosing. And those people over there? Let them read what they choose.