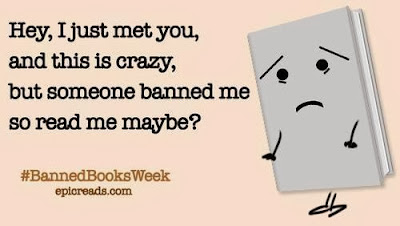 According to the American Library Association's Office of Intellectual Freedom, at least 46 of the Radcliffe Publishing Course Top 100 Novels of the 20th Century have been the target of ban attempts. A few of my very favorite books in the world are on this list: The Grapes of Wrath, To Kill A Mockingbird, Animal Farm, Gone With the Wind. The idea that I might never have been able to enjoy and learn from these treasures is antithetical to everything I value in this life. How many of these books have you read?

1. The Great Gatsby, by F. Scott Fitzgerald
2. The Catcher in the Rye, by J.D. Salinger
3. The Grapes of Wrath, by John Steinbeck
4. To Kill a Mockingbird, by Harper Lee
5. The Color Purple, by Alice Walker
6. Ulysses, by James Joyce
7. Beloved, by Toni Morrison
8. The Lord of the Flies, by William Golding
9. 1984, by George Orwell

11. Lolita, by Vladmir Nabokov
12. Of Mice and Men, by John Steinbeck

23. Their Eyes Were Watching God, by Zora Neale Hurston
24. Invisible Man, by Ralph Ellison
25. Song of Solomon, by Toni Morrison
26. Gone with the Wind, by Margaret Mitchell
27. Native Son, by Richard Wright
28. One Flew Over the Cuckoo's Nest, by Ken Kesey
29. Slaughterhouse-Five, by Kurt Vonnegut
30. For Whom the Bell Tolls, by Ernest Hemingway

33. The Call of the Wild, by Jack London

36. Go Tell it on the Mountain, by James Baldwin

38. All the King's Men, by Robert Penn Warren

45. The Jungle, by Upton Sinclair

53. In Cold Blood, by Truman Capote

55. The Satanic Verses, by Salman Rushdie

80. The Naked and the Dead, by Norman Mailer

84. Tropic of Cancer, by Henry Miller

88. An American Tragedy, by Theodore Dreiser