May is Short Story Month and my pick for today is Barry Hannah. We're in the American South 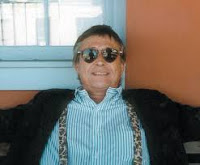 again today, in Mississippi. It doesn't get any more American Southern than this, my friends. Land of the Klan, delta blues, catfish as big as your leg, King Cotton and Jefferson Davis. This stew produces the richest regional fiction this country has to offer. The thing to remember is this: there is really no such thing as the past in Mississippi. The past is present, always.

Barry Hannah was a novelist and a shorty story writer and a miracle. He formed one leg of a sort of literary triumvirate along with Pat Conroy and Larry Brown, direct cultural descendants of Faulkner and Tennessee Williams. Born in Meridian in 1942, he lived in Mississippi all his life, save a couple of brief sojourns hither and yon. Hannah grew up in Clinton and earned a BA in lit at Mississippi College, followed by a MA and MFA at the University of Arkansas.

His first novel was Geronimo Rex (1972), which was greeted with a William Faulkner Prize and a nomination for the National Book Award. Quite the beginning. His first short story collection was Airships (1978), most of which was first published in Esquire. Another collection, High Lonesome (1996), was nominated for a Pulitzer. Hannah taught creative writing at the Iowa Writers' Workshop, the University of Alabama and Texas State University, among others. As the director of the MFA program at the University of Mississippi (Ole Miss, Oxford), he served as teacher and mentor to some truly outstanding talents: Larry Brown, Donna Tartt, and Bob Shacochis, to name just a few. Hannah produced eight novels and five short story collections before his sudden death of a heart attack in 2010. This is a complete bibliography. Go here for a complete list of awards.

Our story is "Water Liars," from Airships.

[Sadly, Larry Brown, Hannah's great friend and colleague, also succumbed to sudden, rude death from a heart attack in 2004. This is a lovely article written by Wells Tower, one of Hannah's students. It chronicles an afternoon spent with Hannah, looking for Brown's grave. It serves as a lovely eulogy for both men.]
Posted by Texas Book Lover at 7:08 PM