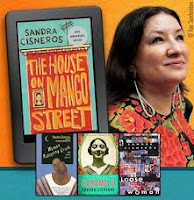 May is Short Story Month and today's author is Sandra Cisneros. Ms. Cisneros is the reigning American queen of Chicana literature and she would not appreciate that description. Truly, her trail-blazing work in the Chicana Literary movement cannot be overestimated. She is an icon; at once one-of-a-kind, and symbol of the silent millions.

Born in Chicago in 1954, she makes her home in San Antonio, where there was quite the kerfuffle a while back when she painted her King William Historic District home purple. One of seven children, and the only girl, her family migrated back and forth over the border, between Chicago and Mexico City. As a result, her work is shaped by a dual cultural inheritance, both Mexican and Anglo, poverty and a misogyny present in both worlds. Ms. Cisneros earned a BA from the Loyola University of Chicago and an MFA from the Iowa Writers' Workshop (y'all beginning to notice a pattern with the Workshop?). She has taught at UC Berkeley and the University of Michigan, and worked as a counselor and arts administrator, among other things. She is a community activist and the founder of Macondo Foundation which provides workshops to help authors with social issues. She is also the founder of the Alfredo Cisneros de Moral Foundation, named for her father, which provides awards to talented Texas authors.

Her acclaimed first book The House on Mango Street (1984) won an American Book Award from the Before Columbus Foundation and has been translated worldwide, and regularly taught in classrooms today. I was privileged to be able to give away twenty copies of this classic for World Book Night last month. Check out her poetry from Loose Women. a poem from which I included on this blog for National Poetry Month in April, called "Little Clown, My Heart." A complete list of her work is here.

I discovered Sandra Cisneros in 1991 when her highly-praised collection of short fiction, Woman Hollering Creek and Other Stories (which won a Lannan Foundation Literary Award), was published. I am a native Texan and grew up with friends who made regular trips across the southern border to visit family. During my childhood I found this a typical practice in my state and thought nothing of it. I attended college in El Paso with residents of Ciudad Juárez. My Anglo consciousness never considered what it might be like to move between two cultures, sometimes on a daily basis, feeling as if you might not quite belong in either. Ms. Cisneros is a pioneer. I credit her for opening my eyes and heart. So thank you.

Today's story is "My Lucy Friend Who Smells Like Corn." [Note: the link to this story no longer works. This is the only link that any publisher/author made me delete for copyright reasons.]
Posted by Texas Book Lover at 11:41 PM