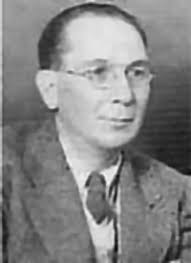 May is Short Story Month and today's author is Richard Connell. Born in 1893, Connell was an American journalist and author who was quite prolific and very popular in his day, writing more than 300 short stories and several novels. He edited The Daily Crimson and The Lampoon while at Harvard and served in the Army during World War I where he spent a year in France and edited the camp newspaper, Gas Attack. What a name.

Connell wrote articles, novels, short stories and movie scripts until his death of a heart attack in 1949 in Beverly Hills, where he was under contract to studios such as Paramount and Universal. His stories were
published in many prestigious magazines like The Saturday Evening Post and Collier's. He was also nominated for an Academy Award in 1942 for best original story for the movie Meet John Doe, directed by Frank Capra and starring Gary Cooper and Barbara Stanwyck, which you can watch here. He was nominated again in 1944 for best original screenplay for the film Two Girls and a Sailor. I know, I know - terrible title. Films with titles like this one don't have screenplays. This is a complete bibliography and list of credits. 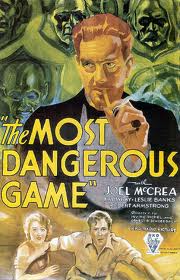 Connell is best known for the short story "The Most Dangerous Game," (1924), winner of an O. Henry Award, which is the story I offer you today. I read this story for the first time when I was in the sixth grade and it freaked me the hell out, deliciously creepy. Tell me, what would be the most challenging game to hunt? Enjoy!