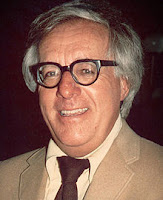 May is Short Story Month and today's author is Ray Bradbury. Today we're going to take on time travel and paradox: the nature of time, the fabric of space, the butterfly effect and the ramifications of each step you take and every move you make.

Bradbury was one of the most-celebrated American writers of the twentieth century. A novelist, short story writer, essayist and playwrite, he specialized in science fiction, fantasy and horror; a descendant of H.G. Wells, Jules Verne, Edgar Rice Burroughs and Edgar Allan Poe. Bradbury considered himself a fantasy writer, claiming that science fiction was the "art of the possible" and as such his only science fiction was his most well-known work,  Fahrenheit 451 (1953). Which is chilling, I mean have you READ Fahrenheit 451? 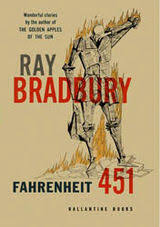 Bradbury was born in 1920 in Waukegan, Illinois, which morphs into "Green Town" in his stories. At the age of eleven he began writing, sometimes on butcher paper during the Great Depression. When he was fourteen the family moved to Los Angeles in search of work and Bradbury fell hard for Hollywood. He learned how to sneak into the Uptown Theater and was there every week. Now Bradbury has his own star on the Walk of Fame. He graduated from Los Angeles High School but never went on to college. He said that libraries raised him. For libraries, see Something Wicked This Way Comes. It was at the Powell Library on the campus of UCLA that Bradbury wrote The Fireman, later known the world over as Fahrenheit 451, which won the Prometheus Award.

Bradbury is credited with twenty-seven novels and more than six hundred short stories, I kid you not. Among these are The Martian Chronicles (1950), The Illustrated Man (1951) and Dandelion Wine (1957). Twenty-seven of his stories were adapted by EC Comics. Adaptations were also made for television such as Alfred Hitchcock Presents and The Twilight Zone. He made his debut in cinema in 1953 with It Came From Outer Space. Over the next fifty years more than thirty-five features, shorts and TV movies were made from his stories and screenplays. This is a complete list of works. I could attempt to include every award and honor earned by this giant but you'd be reading for the next hour, so here's another list. 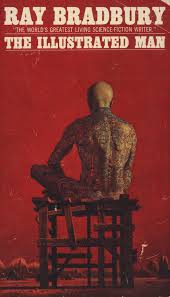 Bradbury's writing is often quite lyrical. He gave credit for this to reading poetry every day. "If you're reluctant to weep, you won't live a full and complete life." For example, from today's selection:


Out of chars and ashes, out of dust and coals, like golden salamanders, the old years, the green years, might leap; roses sweeten the air, white hair turn Irish-black, wrinkles vanish; all, everything fly back to seed, flee death, rush down to their beginnings, suns rise in western skies and set in glorious easts, moons eat themselves opposite to the custom, all and everything cupping one in another like Chinese boxes, rabbits into hats, all and everything returning to the fresh death, the seed death, the green death, to the time before the beginning.


Bradbury died in Los Angeles in 2006 at the age of 91. Upon his death, The New York Times commended him for "bringing modern science fiction into the literary mainstream." Many contemporary artists claim Bradbury as their strongest influence, among them Steven Spielberg and Neil Gaiman. On the day Bradbury died Stephen King put this up on his website:


Ray Bradbury wrote three great novels and three hundred great stories. One of the latter was called 'A Sound of Thunder.' The sound I hear today is the thunder of a giant's footsteps fading away. But the novels and stories remain, in all their resonance and strange beauty.