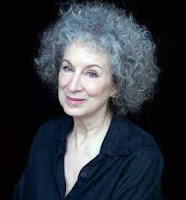 May is Short Story Month and today's author is Margaret Atwood. Atwood is a Canadian novelist, short story writer, critic and essayist.
She is also a founder of the Writer's Trust of Canada which promotes and encourages writers in Canada. Atwood is a feminist, Canadianist (that's not a word), environmentalist and activist, still going strong at 73. You can catch her on Twitter here and on Facebook here. The author's website is here. As usual, there is much too much to tell you in this space so please do read the entire bio at the link above.

She was born in 1939 in Ottawa and spent most of her childhood in the wilds of Northern Quebec with her entomologist father and nutritionist mother. Atwood didn't begin full-time schooling until grade eight when she became an insatiable reader. A particular affinity for Grimm's Fairy Tales would inspire and inform her work for decades to come. Atwood attended Victoria College at the University of Toronto and graduated in 1961 with a BA in English and a minor in philosophy and French. Also in '61 she privately published her first volume of poems Double Persephone, which won an E.J. Pratt medal. She went on to an MA at Radcliffe; curiously, she did not earn a doctorate at Harvard because she never finished her dissertation entitled "The English Metaphysical Romance." But, come on, can you blame her? Atwood went on to two honorary doctorates and taught at several universities, including the University of British Columbia and New York University.

Atwood is perhaps best known for novels such as The Handmaid's Tale and The Blind Assassin, but she has also published more than a dozen volumes of poetry and short stories. Her short stories have been published in Tamarack Review, Harper's and Ms., among others. One of her main themes is feminism and patriarchy. Check out Edible Woman (1969). Atwood claims that she wrote this book before the second wave of the feminist movement and that the label can only properly be used to denote writers who set out to "consciously" write such a work. Which is disingenuous hogwash if you ask me, but whatever. So she is subconsciously one of the foremost women writing feminist literary fiction around. My favorite Atwood novel is Cat's Eye, a coming-of-age tale. Go here for a complete bibliography.

Atwood has contributed much to an international understanding of Canadian literature and is the author of the standard text used in universities, Survival: A Thematic Guide to Canadian Literature. Atwood is one of the most-honored writers in modern literature. She has won an Arthur C. Clarke Award, a Prince of Asturias Award for Literature, a Booker Prize and a Governor General's Award twice. Here is a complete list of awards.

In 1984, Michael Rubbo made a documentary called Margaret Atwood: Once in August, which you can watch here. In 2003 Shaftesbury Films made a series, The Atwood Stories, from six of her short stories, which you can watch here. In the Wake of the Flood is a documentary directed by Ron Mann that followed the author around on the book tour for her novel The Year of the Flood. 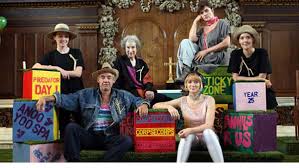 Fun facts: 1) Atwood's family tree includes Mary Webster, who survived a hanging for witchcraft in Connecticut in the seventeenth century; and 2) she may be considering writing the University of Toronto out of her will due to an artificial turf kerfuffle.

Our story is "Stone Mattress."
Posted by Texas Book Lover at 10:58 AM