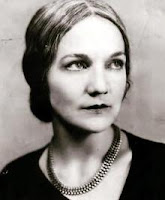 May is Short Story Month and today's author is Texas native Katherine Anne Porter. Born in 1890, Porter was a novelist, short story writer and journalist. She had a very messy personal life which I won't go into here, you can read all about it in the bio. Suffice it to say that the adage 'bad decisions make for good stories' applies here. Personally, I think she sounds like a hoot and I'd have gone to Mexico with her. Fun fact: Her family tree includes Daniel Boone and O. Henry.

Porter began writing in 1917 for the Fort Worth Critic, critiquing drama. In 1919 she moved to Greenwich Village and began ghost writing children's fiction. New York gave her a bad case of politics and she went to work for a magazine publisher in Mexico where she became involved in the leftist movement with Diego Rivera. During the next decade as Porter continued to move between New York and Mexico, she began publishing short stories and essays. Her first collection, Flowering Judas and Other Stories (1930), was greeted with critical enthusiasm. Her novel Ship of Fools (1962) was met with critical acclaim and also, finally, a resounding commercial success. She continued to publish through 1977 and taught at several universities, among them Stanford and the University of Texas where her unconventional style made her very popular with her students. This is a complete bibliography.

Some of Porter's stories were adapted to radio by NBC University Theatre and she made a handful of television appearances during the 50's and 60's discussing literature. 1966 was a banner year for her: The Collected Stories of Katherine Anne Porter was awarded a Pulitzer Prize, the National Book Award and she was appointed to the National Academy of Arts and Letters. She has been nominated for the Nobel Prize in Literature three times. Porter died in 1980 at ninety years of age, her ashes reside by her mother's in the Indian Creek Cemetery in Texas. Texas Historic Landmarks were installed at Indian Creek Cemetery in 1990 and at Kyle in 1991.

Today's story is "The Jilting of Granny Weatherall," which was adapted for television in 1980 and you can watch it here.
Posted by Texas Book Lover at 2:30 PM