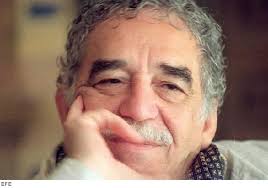 May is Short Story Month and today's author is Gabriel García Márquez. His full name is Gabriel José de la Concordia García Márquez, but his fans call him Gabo. He is a Colombian novelist, short story writer, journalist, screenwriter and all-around certified genius. He abandoned a career in law for journalism and is not  afraid to call bullshit to the face of government, which can be lethal in South America. He speaks truth to power.

García Márquez has earned critical acclaim and popular success for his articles and short stories but is mainly known as a novelist. If you haven't read Love in the Time of Cholera (1985) stop whatever you're doing and go read. Now. García Márquez is credited for popularizing a literary style known as magical realism. That is, elements of the supernatural are interjected into the most mundane of circumstances. Normally, a man gazes out a window to the street below and sees a stray tomcat cross. In a García Márquez story, the tomcat is a peacock.

García Márquez spent his early years with his grandparents. His grandfather, the Colonel, a Liberal and a veteran of the Thousand Days War, was a gifted storyteller. He once told his grandson that nothing weighed as much as a dead man. García Márquez's politics and ideology were shaped by his grandfather and he would later translate these ideas into much of his work. His grandmother also played her part in contributing a sense of omens and superstition. You can find his grandmother refracted most clearly in his novel One Hundred Years of Solitude (1967). William Kennedy has called it "the first piece of literature since the Book of Genesis that should be required reading for the entire human race." Add it to your list. In fact, here is a complete bibliography. García Márquez won a Neustadt International Prize for Literature in 1972 and a Nobel Prize in Literature in 1982.

Because of the controversies of his journalism and the popularity of his fiction, García Márquez actually served as negotiator between the government of Colombia and various rebel groups. He was friends with Fidel Castro, which occasioned a punch in the face from Mario Vargas Llosa (another genius everyone should read - try The Feast of the Goat) and denial of a visitor's visa by the United States. President Bill Clinton eventually lifted that ban.

I'll leave you with this:


Whether in fiction or nonfiction, in the epic novel or the concentrated story, Márquez is now recognized in the words of Carlos Fuentes as "the most popular and perhaps the best writer in Spanish since Cervantes." He is one of those very rare artists who succeed in chronicling not only a nation's life, culture and history, but also those of an entire continent, and a master storyteller who, as The New York Review of Books once said, "forces upon us at every page the wonder and extravagance of life."

Our story is "One of These Days."
Posted by Texas Book Lover at 8:35 PM