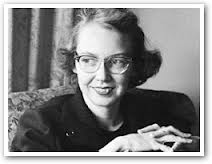 May is Short Story Month and our author today is Flannery O'Connor. Born in Georgia in 1925, Ms. O'Connor was a devout Roman Catholic in the Bible Belt of the Protestant American South. She was a graduate of what was to become Iowa's now-famous Writers' Workshop and was considered by her professors one of the finest writers ever to attend the program. Ms. O'Connor wrote two novels but is best-known for her volumes of short stories. This is a complete list of published work. She won several O. Henry Awards and grants from the likes of the Ford Foundation and the National Institute of Arts and Letters. Tragically, lupus took her life at the age of 39. She won the National Book Award posthumously for The Collected Stories in 1972.

Flannery O'Connor's work is a brew of religion, race, family, history, pride, guilt, confession, repentance, social standing, rigid moral codes; contradictions of every stripe and all usually present in any single individual. This is why the region produces some of the richest stories anywhere on Earth. A twisted history and the psychic damage it causes is good for art, if not much else. It's called Southern Gothic.

Today's short story is "A Good Man Is Hard To Find," from the eponymous collection published in 1955.
Posted by Texas Book Lover at 1:19 PM