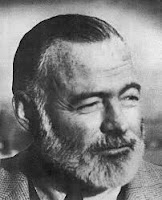 May is Short Story Month and today's author is Ernest Hemingway. Hemingway may be the most influential American author of the twentieth century, both for his writing and his personal life. He is the example of a spare, economical narrative style that would be much imitated. Henry James remarked that World War I "used up words." Hemingway was also an adrenaline junkie: women, bullfighting, big-game hunting and war as a sort of hobby.

Hemingway was born in 1899 in Oak Park, Illinois. After graduating high school he went to work as a reporter for the Kansas City Star for a few months before heading for the Italian front as an ambulance driver in World War I. He was sent home seriously wounded by mortar fire (his conduct during this incident won him the Italian Silver Medal of Bravery) in 1918. He married Hadley, the first of his four wives, in 1923 and headed for Paris where he was a foreign correspondent for the Toronto Star and part of a large (both famous and infamous) expat community. In Paris he met Ezra Pound, James Joyce, Gertrude Stein and Pablo Picasso, among many others. His first book, Three Stories and Ten Poems, was published in 1923 and his first novel, The Sun Also Rises, was published in 1926. It is widely considered his best work.

Hemingway and Hadley divorced and he promptly married his mistress, Pauline. She wanted to return to the United States and, upon the recommendation of John Dos Passos, they relocated to Key West. His next work, A Farewell to Arms, published in 1929, was the result of his experiences in WWI. It established his literary reputation. A nonfiction work, Death in the Afternoon, was the result of an extended sojourn in Spain in 1929 and a morbid fascination with bullfighting. 1933 found him on safari in Africa with Teddy Roosevelt's guide, where he suffered a prolapsed intestine from dysentery. This experience produced the short story "The Snows of Kilimanjaro." He returned to Key West and Green Hills of Africa was published in 1935 to mixed reviews.

In 1937 Hemingway agreed to cover the Spanish Civil War for the North American Newspaper Alliance. He was at the Battle of the Ebro in 1938, witnessing the final republican stand. In 1939 he left Key West in his boat bound for Cuba where he would take up residence at the Hotel Havana for what became a long separation from Pauline. An acquaintance from Key West, Martha Gellhorn, joined him in Havana. They married in 1940 in Wyoming and she is said to have inspired his most well-known novel, For Whom the Bell Tolls. This marriage broke up when Hemingway met Mary Welsh in London in 1944 where he was reporting on World War II, during which he was present at the Normandy landings, the Battle of Hürtgen Forest, the Battle of the Bulge and the liberation of Paris. In fact, historian Paul Fussell states:


Hemingway got into considerable trouble playing infantry captain to a group of Resistance people that he gathered because a correspondent is not supposed to lead troops, even if he does it well. This was in fact in contravention of the Geneva Convention, and Hemingway was brought up on formal charges; he said he "beat the rap" by claiming that he only offered advice.

The man even got himself a Bronze Star. He married Mary in 1946 and tumbled into clinical

depression as an ever greater number of his contemporaries began to die on him: Yeats, Stein, Fitzgerald, Anderson, Joyce, and that's not the whole list. His health began to deteriorate during this period: migraines, high blood pressure and diabetes, not helped at all by years and years of drinking like a whale. Not much writing got done during this time but then came The Old Man and the Sea (1952), which won him a Pulitzer Prize and a Nobel Prize in Literature.

Hemingway and Mary went off on safari to Africa in 1954 and were in not one, but two plane crashes that nearly killed him and left him in pain for the remainder of his life. According to Mary, his injuries included two cracked discs, a kidney rupture, liver rupture, a dislocated shoulder and a broken skull, which leaked cerebral fluid, as well as wide-spread second degree burns when the second plane actually exploded. He began a slide into depression that progressed to confusion and paranoia. He was checked into the Mayo Clinic under a false name in late 1960 and treated with shock therapy. Papa would not recover this time. As we all know, he took his life with a shotgun at his home in Idaho on July 2, 1961. (Note: Hemingway's father, a sister and a brother also died of suicide. A genetic condition called hemochromatosis is thought to be the cause.)

I tend to be of two minds where Papa Hemingway is concerned. His very name may as well be a synonym for testosterone run amok. I vacillate between wanting to tell him off and never see him
again, and then wanting to shake my head, make him another drink and climb into his lap so I can listen to another story. But oh what a life! What a glorious terrible mess; what fodder for an imagination and talent such as his. In the end, no other life would do. File this under: bad decisions make for good stories. Pain got him in the end but I think we should feel rather grateful to the old cuss. Otherwise, we'd have to do this shit ourselves.

Our story is "The Snows of Kilimanjaro."

Bonus: check out The Hemingway Women. They deserve their own book.
Posted by Texas Book Lover at 8:58 PM