May is Short Story Month and today's author is Dagoberto Gilb. I hardly know where to begin,

there's just so much to tell you. Um, ok: sexy, sexy man - no no sorry, well yes, but sorry anyway. Ok, this instead: Gilb stands astride American Chicano lit like no other has, the acknowledged master of the border. I would love to meet him, he'd probably tell me how much he hates that description, but I've got a whole big stack of books that need signing.

Born in Los Angeles to a Mexican mother and German father, Gilb graduated from UC Santa Barbara with a double major in Philosophy and Religious Studies; later earning an MA in Religious Studies. He was working as a journeyman carpenter on the University of Texas El Paso campus when he heard that Raymond Carver was there. Influenced by Carver (featured on this blog on May 1, 2013), Gilb began publishing short stories in 1982. His first formally bound work, Winners on the Pass Line (1985), was put out by El Paso's own Cinco Puntos Press. The first full collection, The Magic of Blood (1993), won the PEN/Hemingway Foundation Award and Jesse Jones Texas Institute of Letters Award.  Gilb has since offered up more volumes of short stories, a novel and a collection of essays. He edited the anthology  Hecho en Tejas (2006), which won the PEN Southwest Book Award, and which holds pride of place in my personal bookshelves. There is a complete bibliography here and a complete list of awards here. 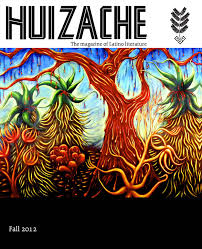 Gilb has worked on a few documentaries and wrote for Fresh Air on NPR. In 1997, he accepted a position teaching in the MFA program at what is now Texas State University in San Marcos. In September 2009, he went to the University of Houston-Victoria as writer-in-residence and executive director of Centro Victoria: Center for Mexican American Literature and Culture. He had a stroke that same year, dived into rehab, and came out the other side with a new collection, Before the End, After the Beginning. Gilb is a passionate and eloquent advocate for Latino Studies programs and, as such, is royally pissed off at Arizona, as should we all be. Please follow this link to learn more about Librotraficante. His newest project (I think it's the newest - I can't keep up) is Huizache, The Magazine of Latino Literature.

Gilb's stories seep up from the primordial ooze, they are elemental: identity, pride, work, testosterone, rage, love, lust, truth; you couldn't possibly ask for any more blood from one human being. It's that old adage about how people think writing is easy. Yeah, you just sit down at the typewriter and open a vein. Life is glorious in it's messiness, yes?