May is Short Story Month and today's author is Andre Dubus (Duh-BYOOSE, rhymes with moose). Born to a Cajun Irish-Catholic family in Lake Charles, Louisiana in 1936, he attended parochial schools and nearby McNeese State College. Inspired by Hemingway, Chekhov and Cheever, he later graduated from the MFA program at the Iowa Writers' Workshop under the tutelage of Richard Yates.

Mr. Dubus's personal life was often difficult: three wives; six children; a daughter was raped as a young woman, which inspired in him a paranoia that caused him to carry a revolver everywhere they went until he almost shot a man in a drunken argument with his son outside a bar; an auto accident crushed his legs in 1986, when he stopped to help some stranded motorists at the side of the road and a car ran over him; he battled clinical depression as a result of the accident and spent the remainder of his life in a wheelchair. The mounting medical bills, threatening a landslide, led his friends Kirk Vonnegut and John Updike to host a literary benefit in his honor. Even after all of this, his friends claim to have never known a kinder, gentler man. He died of a heart attack in Haverhill, Massachusetts, in 1999.

Mr. Dubus's life seemed to devolve into a series of tragedies but he never stopped writing. And, my lord, what beautiful writing, what gorgeous, sharply drawn stories. There is not an extraneous syllable anywhere to be found. He wrote about ordinary people and their ordinary lives. He wrote of loneliness, pain, violence, courage and redemption. He once told an interviewer "I think honest writers write about what bothers them." Dubus' characters are multi-dimensional, satisfyingly complex; and he seems to regard them with a tolerant affection, as if none are truly beyond hope. I believe the thing I appreciate the most about his fiction is that it is rarely sentimental.

Mr. Dubus wrote one novel but considered himself to be mainly a writer of short fiction. His stories appeared in the most prestigious literary journals, such as Ploughshares, and magazines like The New Yorker. It is because of his devotion to the short story form that he is largely unknown to the general public; he was a writer's writer. He won the PEN/Malamud Award, Rea Award for the Short Story, the Jean Stein Award from the American Academy of Arts and Letters, and nominations for a National Book Critics Circle Award and a Pulitzer Prize. For a complete list of works look here.

His papers are archived at McNeese and Xavier Universities in Louisiana. His works have been translated to the big screen, the best known of which is probably In The Bedroom, which won several awards for its all-star cast, including Sissy Spacek and Marisa Tomei. 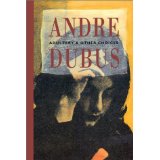 His son, Andre Dubus III is also an accomplished writer. His novel The House of Sand and Fog was nominated for the National Book Award and was made into an Academy Award-nominated film.

Our story today is "The Fat Girl," from Adultery and Other Choices.
Posted by Texas Book Lover at 11:51 PM