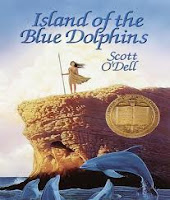 It's the last day of Children's Book Week 2013 and my pick for today is Island of the Blue Dolphins (1961) by Scott O'Dell. It is based on the true story of a young Nicoleño Indian girl stranded alone for eighteen years on San Nicolas Island in the 19th century. In 2012, archaeologists believe they found the cave she lived in and excavation is ongoing.

Karana's village is forced to leave the island and relocate but she is left behind when she jumps off the boat to follow her brother who has forgotten his spear. Her brother is subsequently killed by a pack of feral dogs and Karana must learn to survive. She must learn to be successful at all of the tasks traditionally reserved to men and boys, such as making spears and canoes and hunting. Over time she develops a kinship with the animals of the island, including the alpha male of the dog pack that killed her brother, as they are her only companions. Eighteen years after the departure of her entire village, a ship arrives on the island and carries Karana to the mission at Santa Barbara on the coast of California.

Island of the Blue Dolphins won a Newbery Medal in 1961 and was adapted to film in 1964, winning a Golden Globe Award for Celia Kaye as Karana. If you enjoyed this book, there is a sequel, Zia (1976).

Bonus: you can go here for an animated interactive exploration of the island.
Posted by Texas Book Lover at 6:20 PM