The Truth of All Things 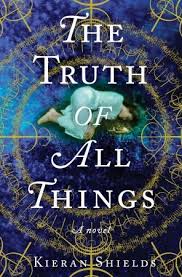 Wow, what a brew! Puritans, witches, detectives, murder, black magic. It's been a good while since I read something I couldn't put down. I stayed up way past my bedtime to finish this one. The Truth of All Things is Kieran Shields's first novel and, thank the gods, not his last. A review for the follow-up, A Study In Revenge, will be posted in a few days. Both novels are literary historical thrillers starring Portland police deputy marshal Archie Lean and private detective Perceval Grey, formerly of the Boston Pinkerton Detective Agency.

It is 1892 in Portland, Maine, the bicentennial of the Salem witchcraft trials. Maggie Keene, a young prostitute, has been found murdered in an outbuilding of an industrial concern, a pitchfork pinning her neck to the ground, among other gruesome details. Deputy Lean is on the scene with the city coroner and the mayor. The coroner has called on a stranger, a detective from Boston to examine the scene. Perceval Grey is half Abenaki Indian and unorthodox, to put it mildly, a student of Dr. Hans Gross's new theories of criminology and the research of Kraft-Ebing. No one's very confident about this arrangement, but are confounded by the details of the scene, and so decide to see where it goes.

We follow Lean and Grey and a small supporting cast, including a pimp and his hired muscle as well as the Historical Society and a colonel in the Temperance Union, all over New England for the next couple months as more people die in highly original ways. Lean and Grey begin to close in on the perp, who literally believes that the Reverend Burroughs and Satan himself are his homies. We are even treated to the nineteenth century equivalent of chase and action scenes. I can see the film playing in my head, can't seem to dislodge Robert Downey, Jr.

Kieran Shields knows his New England history and geography, lore and legend. He has conjured an intricate tale from a wide variety of elements, from Puritans and witches to temperance activists and rum-runners, class conflicts and immigrant bigotry to tradition and the relentless onslaught of progress. The juxtaposition of the superstitious Puritans and modern criminal investigation and psychology is extreme. In the figure of Detective Grey, Mr. Shields introduces the birth of modern criminology, the theories and techniques that have led us, a hundred years later, to an endless supply of CSIs. Deputy Lean is a surprisingly open-minded officer, willing to follow Grey's lead and learn to accept the scientific method and become an equal partner in the investigation. The author is clearly inspired by the Sherlock-Watson dynamic. Grey and Lean share a relationship that moves from wariness and skepticism to mutual appreciation and respect for each other's complimentary talents. Also, Archie Lean is prone to striking a pose and reciting Longfellow, which has endeared him to my heart.

Here's some sample dialogue for you:


"I have scars older than him." The doctor turned and reached for the doorknob. "I just think this case might warrant someone with a bit more expertise."

"And MacBeth is just a play about a Scotsman..."

and this (the coroner's niece has been sneaking around his study):


"After you left for Scituate, I was informed by the staff that Helen had borrowed the book I'd promised her. Only I didn't recall any such promise. Upon a close inspection of my shelves, the only volume missing was Kirkbride's work, Arrangements of Hospitals for the Insane. You can imagine how puzzled I was, being unaware that my niece was currently engaged in the construction of an outdated insane asylum."

"There's no need for sarcasm, Uncle."


"Do you really not believe in spirits?" Lean asked. "The possibility of communicating with some eternal soul in the afterlife?"

Grey looked at him with one eyebrow pointing up to heaven. "The overwhelming majority of people in the world are unimaginative dullards who, in their three score and ten allotted years, manage to divine no purpose for their being other than to chase money, seize what moments of physical pleasure they can, and to create new, largely unimproved versions of themselves, whom they raise with the same mindless disregard they have applied to their own lives. Tell me, please, what use would such beings have for an afterlife? Whatever would they do with an eternity?"


He was a paunchy fellow in a well-worn tweed coat. Thick glasses sat atop his upturned nose. A mustache with arrow-sharp tips stretched out across his pale, flabby face. Helen always had difficulty shaking the image of a highly literate mole that had burrowed up into a closet of ill-fitting clothes, then wandered blindly into the library.

The Truth of All Things is flawlessly plotted and paced to hold the attention of modern readers. It is peopled by richly-drawn characters, even the women are people. This novel is set in an elegantly rendered robber-baron era New England. I feel as if you could drop me off in downtown Portland and I could find my way around, just from reading this book. The city is an individual, comparable to Jonathan Kellerman's Los Angeles or James Lee Burke's New Iberia.

If you liked The Alienist by Caleb Carr, you will love The Truth of All Things. It is smart and witty and never underestimates its reader. Go get this book and read it tonight. I cannot recommend  it to you highly enough. And I am the luckiest reader on the planet, for I have the sequel right here beside me. Next!
Posted by Texas Book Lover at 5:33 PM