A Study In Revenge 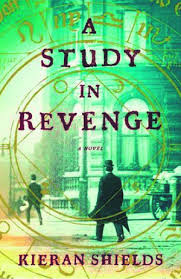 Deputy Marshal Archie Lean of the Portland Police and private detective Perceval Grey are back in the sophomore effort from Kieran Shields, author of The Truth of All Things, which I reviewed on this site last week. A Study in Revenge may be Mr. Shields's sophomore effort, but it is most assuredly not sophomoric: more confident storytelling, relentless plotting, expert timing, wit, rich historical detail and complex characters.

The year is 1893, one year after the witches and Puritans of The Truth of All Things. This time around we are dealing with Vikings, Phoenicians, runes, Rosicrucians, Freemasons, Baphomet, the philosopher's stone, Oliver Wendell Holmes, Jr., practical jokers and a surfeit of handlebar mustaches. The story opens with the robbery and murder of Frank Cosgrave, a petty thief and picker of locks in Portland, Maine. Curiously, the unfortunate Mr. Cosgrave refuses to stay buried and Archie Lean calls in Perceval Grey to investigate the macabre scene.

Across town, an old and very ill man is dying. Horace Webster calls Grey to his bedside and hires him to find his granddaughter, missing for a year now. At the reading of Mr. Webster's will, we discover that the granddaughter is not the only thing missing. Gone from the estate lawyer's offices is an object called the thunderstone, an artifact passed down in the Webster family for generations, according to the eccentric instructions in the original bequest. There are some seriously weird carvings on this stone, alchemical symbols believed by more than a few unhinged personalities to hold the key to eternal life, the literal kind.

These three investigations continue on parallel lines until they intersect with a bang. Greed, arrogance, superstition, Jotham Marsh, and Grey's love life come together in an explosive plot twist, revealing a maniacal lust for revenge that threatens to take down everyone and everything in its path.

I feel the need to share a few examples of dialogue:


A common misconception. No, that's not Satan. It's Baphomet.
I beg your pardon? Lean said.
Baphomet. Don't be surprised never to have heard of him. He's essentially a fabricated pagan deity.
As opposed to what? Grey asked. A genuine pagan deity?


...But anyone familiar with Eliphas Levi's work would know of the man's fascination with alchemy.
Understandable, Lean muttered. Who wouldn't want to be able to spin straw into gold?
Lead into gold, not straw, Grey corrected him. You're thinking of Rumpelstiltskin.


Just a moment. Let me see if I'm understanding you correctly. My fears for your safety are unfounded...because somebody already tried to kill you before these threats were posted?
In a manner of speaking. That is, I'm in no more danger now than I was this time yesterday, before these ridiculous paintings appeared.
You have the oddest way of looking at life, Lean said.
You'd have little use for me otherwise, Grey said. 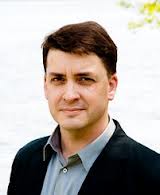 I do enjoy these books so: sharp dialogue; the belief that ideas matter, that they shape the personal and the political; a sophisticated story; women who are players, integral to the plot, not mere window-dressing or objects to be acted upon. The author trusts his audience. Mr. Shields believes that we are equal to the task and never condescends to us. I can't impress upon you enough how rare that is, and how appreciated. The only false note was struck in the last lines of the epilogue (which I don't think was necessary), rather ham-handedly assuring us that there is a sequel in the offing. But no matter. We know there is a third book on the way. Write faster Mr. Shields!

OK, I lied - one more, from a conversation between Jotham Marsh and Perceval Grey:


Marsh: ...Would you blame the shopkeeper for murder because he sold a man a fishing rod? Only because later that fisherman, in his misguided fervor, comes to fatal blows with another over a favored fishing spot?

Grey: Of course not. But what of the shopkeeper who fills a young man's head with tales of a magical fish who swims in a mystical pond and will grant wishes to any angler who catches it. 'Oh, and by the way,' whispers the shopkeeper,  'the only bait that works is human flesh.'