This book makes me want to go back to school.

Jackson Carter is an anthropology professor at Thomas Ford University in Illinois. He has returned from Africa and written a book about his experiences with the Mbuti. Jackson has drawn the disapproval of the anthropological community by "going native;" most spectacularly by taking a girlfriend and fathering a daughter.

Sunny (fka Willa Fern Cochrane) has just emerged from a 6-year stint in prison for shooting her husband Earl, the preacher of The Church of the Burning Bush With Signs Following (henceforth known as CBBWSF), a bunch of Pentecostal snake-handling strychnine-drinking lunatics who are busily excommunicating themselves from the entire world. Earl had forced Sunny to put her arm in a box of rattlesnakes at gunpoint and she was bitten. So she shot Earl with his gun and I say good for her. Sunny is determined to change her life and does a 180 when she leaves prison and enrolls at Thomas Ford University where she meets Jackson Carter.

They soon embark on a relationship that is transformative for all involved, including friends, other professors and dead uncles. Earl meets Jackson when he shows up to take Sunny "home." Jackson's anthropologi-ness (which can also kill cats) gets the better of him and he decides to make the followers of the CBBWSF his next research subject. We already know Jackson's propensity for going native so guess what happens next.

Snakewoman is a good book. Mr. Hellenga has done about 3 tons of research and it's a good thing. We learn a great deal about groundhog hunting, timpani drums, catching snakes, recipes, pygmies and France, just to scratch the surface. However I confess that by page 346 I wearied of the instruction manuals. Such exotic material is deftly handled by Mr. Hellenga, never falling into stereotype, which would have been so easy to do. I enjoyed this book very much and confidently recommend it to you.

If you enjoy Snakewoman you may want to take a look at Mr. Hellenga's other works: http://www.roberthellenga.com/

Posted by Texas Book Lover at 1:09 PM No comments:

Home Truths is Gerald Duff's memoir of a boyhood spent on the Gulf Coast and deep in the piney woods of East Texas. I am a native Texan and I understand volumes by the mere mention of East Texas. I don't even like to drive through East Texas. Although a short trip in terms of geography between the gulf and the woods, the cultures and circumstances are worlds apart. Mr. Duff's father Willie was from East Texas but had moved from that physical world and worked at a good job in the petro-chemical plants of the Texas Gulf Coast. These were dependable well-paying jobs in the years following World War II. He married Dorothy Irwin, the daughter of an oil company manager from Nebraska. Night and day.

The author was born in a hospital which was something to remark upon in that day and age and place. Subsequently he acquired two sisters. Then Willie Duff was fired from his job, what I consider to be a real disaster because in an apparent fit of pettiness and self-wounding pride, he packed up his family and sentenced them to years in an East Texas prison. Not a prison with physical walls but a prison nonetheless, a prison of poverty, bigotry, religion, and ignorance.

This memoir is about how book-loving Gerald Duff survived and escaped with sensitivity and intellectual curiosity and ambition in tact. It is the author's contention that people in these circumstances must believe the lies they tell about themselves and each other in order to survive the psychic wounds inflicted by this culture. Desperation is a ruinous thing. This book is honest and courageous and I recommend it to you all.

http://www.prs.tcu.edu/
Posted by Texas Book Lover at 1:29 PM No comments:

Beast Saves the Brothers and Sisters of the Cosmic I Am 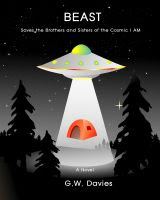 Beast is a hippie drifter searching for the meaning of life. He finds that meaning in cult leaders Bo and Peep and follows them to a commune in the wilds of Montana where they and their followers, known as the Brothers and Sisters of the Cosmic I Am, are waiting for the imminent arrival of their space alien brethren. What could possibly go wrong?

Plenty. Beast shows up at the commune with a small collection of people in tow, many of whom turn out to be certifiable. If they weren't nuts when they arrived they will be in very short order. These include a girl who has recently been de-programed from the last cult; a jazz trumpeter with a raging heroin addiction; and a former Hollywood producer, a raging perv, whose own commune was recently bankrupted by the IRS.

In the beginning the brothers and sisters are all getting along famously, but it doesn't take long for trouble to arrive. The commune is splitting into two factions: one supporting Bo and Peep and the other worshipping Chad, the jazz trumpeter, who keeps losing limbs. Then someone begins stalking and attacking the brothers and sisters and peace and love take a backseat. It is up to Beast to save the day!

I enjoyed this book. It's different, a blend of genres, blurring all the lines. Their is a myriad of sex romping through this book and some of you will find it objectionable. Otherwise, if you're a Tom Robbins fan, you will like this one too.
Posted by Texas Book Lover at 2:16 PM No comments: 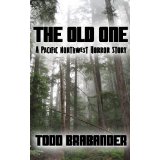 A stranger passing through town on his way to somewhere else is waylaid by mud slides blocking the roads. With nowhere to go and nothing better to do, he hangs out and collects stories at the local watering hole and all of these stories seem to contain a note of menace, of poorly concealed fear. So, of course, just as in the movies where the teenage girl walks through the unexpectedly open door of her home, when there's a storm outside and all the electricity is out and the phone line has been cut and her boyfriend has mysteriously disappeared, when obviously there is a psychotic serial killer lying in wait, the stranger decides to investigate. He recruits a few of the locals and they get a little ambitious: "...that was what they planned to do; save the world. It sounded simple enough."

This tale is spun with promise by Todd Brabander. It is clearly in the tradition of Stephen King. In my opinion, Mr. Brabander should keep at his writing, especially of the horror genre.

And Smashwords at: http://www.smashwords.com/

P.S. He did a marvelous job with the ending, just the right tone.
Posted by Texas Book Lover at 2:37 PM No comments:

The Redemption of George Baxter Henry

re-demp-tion [re demp shuh`n] noun
1. an act of redeeming or the state of being redeemed.

2. deliverance; rescue.
3. Theology . deliverance from sin; salvation.
4. atonement for guilt.
5. repurchase, as of something sold.

George Baxter Henry is a middle-aged attorney from Boston. He is married to Pearl. Their college-age son Billy is in a band being wooed by record companies. Iska is their 14-year-old daughter. Muriel is Pearl's mother. The entire family is on vacation in a small village in France.

OK, now try this. George is having an affair. Pearl is mostly clueless. Billy is a cocaine addict. Iska is obsessed with apples. Muriel, who discovered George's paramour, hates him. The entire family is on vacation in a small village in France for some bonding in an attempt to save themselves from themselves and each other.

It was refreshing to see an author treat this material as a farce. After all, with this material, Mr. Bowman could have chosen to write just another teleplay for Lifetime. George is not a sympathetic character but he is the center of attention, so you have to put up with him. In fact he's fairly appalling but he is an original voice, often hilarious, and offers no apologies. He is who he is. This book tells the story of how his family learns to put up with him. In the spirit of farce all issues are resolved by the conclusion of this novel, one way or another, and tied up in a neat package.

This book puts me in mind of second chances. Because that's what redemption gives you, right? A second chance.

Check out The Permanent Press for other offerings: http://www.thepermanentpress.com/

P.S. I loved Iska and the apples

Posted by Texas Book Lover at 1:52 PM No comments: