A Visit From the Goon Squad

And in the immortal lyrics of Don McLean's American Pie: Can music save your mortal soul?

A Visit From the Goon Squad says yes it can. Visiting the present and the past and back again, this infuriating and lovely novel is about the ravages of  time and how it affects a cast of characters whose lives swoop and dart and intersect each other at the most unlikely points along the way. Just as importantly this book is about music, rock and roll and how it transports and transcends and heals.

Let's see if I can get this straight. As a teenager Sasha is a drug user and kleptomaniac who is a passionate devotee of music and of Bennie and his high school band. Years later Sasha is an assistant to Bennie who has become a music executive famous for discovering a band called The Conduits and starting his own record label. He was in a high school band with Scotty who has been down and out and possibly a little mental. Years later Scotty becomes a successful musician with Bennie's management. Stephanie is Bennie's ex-wife. She works as a publicist for Dolly who has a daughter named Lulu. Years later Lulu is an assistant to Bennie and hires Alex, who had a one night stand with Sasha, to promote Scotty's first concert in 30 years. Sasha eventually reconnects with Drew, her college boyfriend. They marry and have a daughter who confounds Sasha by keeping a diary using Powerpoint.And any number of various characters.

The question is what happens between A and B? How do you get from back there to right here? How can you tell if the journey was successful? This set of criteria is put forth for your consideration by Jules,  Stephanie's journalist brother, while he was in prison: 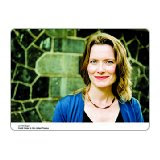 Now these are all good questions. But can any of us come out in the black on all of them? At any given time? I don't think so. And neither do these characters. But they do get from A to B and they are moving along to C D E.....


If you'd like to visit the author: http://jenniferegan.com
Posted by Texas Book Lover at 3:28 PM