Michael Perry is an interesting man. He leads the life that so many nameless drones in the city think they would trade a left arm for: bucolic, picturesque, wholesome. I'm sorry if that seems somehow snide because Michael's life is all of those things. It certainly is a good life. Although I can't shake the thought that his life is a special order from NPR. And he has been on All Things Considered, more than once.

The author returned home from the city after twelve years. Those drones should take note right here: Michael can work from home. He is a writer so he can work with a modem. He has an impressive catalogue: Population 485: Meeting Your Neighbors One Siren at a Time; Coop: A Family, a Farm, and the Pursuit of One Good Egg; Truck: a Love Story; Coop: A Year of Poultry, Pigs and Parenting; Off Main Street: Barnstormers, Prophets and Gatemouth's Gator; and Big Rigs, Elvis &the Grand Dragon Wayne and Why They Killed Big Boy and other stories, collections of his essays. 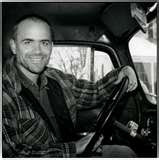 I find this book difficult to review. I think it's not necessary to review the book because I can just describe the author's life. It's the same thing. Michael Perry's writing is funny and warm and certainly evocative of small town America. But it is sentimental, sometimes a little precious. In this book the truck stands background for a year of his life. During that year Michael obsesses over his backyard garden, leaves for book tours, reports on various family members, saves people from house fires and car wrecks because he is a member of the volunteer fire and rescue, hunts deer and gets married. You are all correct that these things are usually mundane, with maybe the exception of the married part or maybe not. It's Michael Perry's talent and skills of observation that make the reader listen to see what he will say.

In addition to the list of books above Perry does live reading events. He is also a member of a band whose music is a mix of straight-up twang and churchly harmonies, according to his web site http://www.sneezingcow.com/ .
The first album is titled HeadWinded - Michael Perry and the Long Beds and the second is Tiny Pilot - Michael Perry and the Long Beds.

I didn't figure out how to rate this one so I am giving it a 3.5