Travels With Charley - In Search of America

First off, Charley is a dog. You would think that John Steinbeck would have a manly dog, a lab, a retriever or maybe a shepard? Well you would be wrong. Charley is a poodle and he is blue.

Steinbeck decided that he didn't know his country anymore. He felt he was writing about things he no longer knew so he decided to take a road trip around the country. He put a camper on a 3/4 ton truck and stocked food, water, plenty of liquor and dog food. He vowed to stay out of large cities, he would sleep in camp grounds, trailer parks and next to various streams. When he decided he was ripe enough he would spend a night in a motel for the shower.

Steinbeck began his trip in Connecticut, made a great loop around through Maine, Michigan, Wisconsin, missed Minnesota due to a pathological fear of traffic, North Dakota, Montana which he claimed as his great love, a short dogleg to Yellowstone which he pronounced nature gone nuts,
Washington where he did not recognize the Seattle of his experience, a sweet little city of hills and gardens beside a beautiful harbor, with its freeways and tract housing, thankfully Oregon with its 300 foot redwoods was still a religious experience, California where he was born and raised, Texas (disclaimer: I am a native Texan but notice that I do use quotes to bolster my snobbishness) where he discovered that "Texas is a nation in every sense of the word," and "Texas is the only state that came into the Union by Treaty and the only state that retains the ability to secede at will." 'Nuff said, and finally New Orleans suffering the birth pangs of a sea change in race relations. 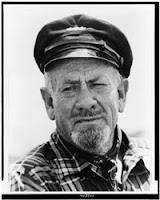 A couple of things made me stop and consider and make a note to look at later. Here they are:

Prescient environmentalist: "...I do wonder whether there will come a time when we can no longer afford our wastefulness - chemical wastes in the river, metal wastes everywhere, and atomic wastes buried deep in the earth or sunk in the sea. When an Indian village became too deep in its own filth, the inhabitants moved. And we have no place to which to move."

On nostalgia for the good 'ole days: "Even while I protest the assembly-line production of our food, our songs, our language, and eventually our souls, I know that it was a rare home that baked good bread in the old days. Mother's cooking was with rare exceptions poor, that good unpasteurized milk touched
only by flies and bits of manure crawled with bacteria, sudden death from uknown causes, and that sweet local speech I mourn was the child of illiteracy and ignorance." So when someone waxes nostalgic you should consider the options.

I recommend this book for John Steinbeck fans. There are portions where the story tends to lag some but not for long. Others may find it entertaining if you like travel books or Americana.
Posted by Texas Book Lover at 9:57 PM